Seth Meyers didn’t have a new “A Closer Look” segment on “Late Night” Tuesday night, but that doesn’t mean Meyers skipped making jokes at Donald Trump’s expense. His monologue was filled with barbs pointed directly at Trump, from his family separation policy to his claims about German crime statistics to a loophole that Trump himself offered up in a tweet that Meyers joked is the key to finally getting rid of him.

Since Meyers’ monologue is a series of quick hitters every night, we’ll just organize the quotes by what joke he’s making.

On Kirstjen Nielsen’s claim that Congress could quickly handle the family separation crisis: “Homeland Security Sec. Kirstjen Nielsen yesterday dismissed demands that President Trump unilaterally end the practice of separating families at the border. And said, quote, ‘Congress can fix this tomorrow.’ Really? Have you met congress? they are still finalizing the Louisiana Purchase.”

On Trump’s speech Tuesday to the National Federation of Independent Business: “President Trump today spoke to the National Federation of Independent Businesses. Am I crazy or is he just making up fake organizations to speak to because he’s afraid to talk to actual voters? ‘Oh, you hate me because of my immigration policies? Funny, because the League of Women Fishermen said they’d love it if I spoke at their birthday flounder fest.’ ”

On a new revelation about Donald Trump Jr.: “According to a new book about President Trump’s children, Donald Trump Jr. was nicknamed ‘Diaper Don’ in college and would wake up covered in piss in strangers rooms. Like father like son, I guess.”

On Trump’s claims about German crime stats that don’t exist: “President Trump repeated his false statement today that crime is up in Germany and said the numbers may appear lower because officials don’t want to report the crimes. Dude, you want us to believe you’ve been poring over secret unreleased German crime statistics? You haven’t even read your own autobiography.”

The punchline for that joke, by the way, came in this image that appeared at the end of the quote: 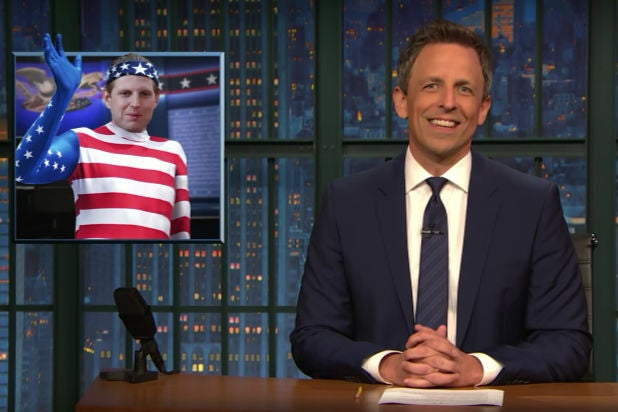 You can watch Seth Meyers’ monologue from Tuesday’s episode of “Late Night,” which also includes a few non-political jokes, in the video embedded at the top of this post.