Seth Meyers took aim at Fox News’ Maria Bartiromo on Monday night, calling her “one of the most unhinged conspiracy theorists on Fox” for her baseless Capitol riot conspiracies — including that there were no firearms at the deadly Jan. 6 siege.

Bartiromo and Minnesota senator Ron Johnson made the false claims on Fox’s “Sunday Morning Futures,” which Meyers replayed on “Late Night With Seth Meyers” as part of his “closer look” segment to explain how “Republicans are still obsessed with trying to overturn the election of the 2020 election and rewrite the history of what happened during the January 6 insurrection at the Capitol.”

Meyers pointed to Johnson and Bartiromo’s quibbling over House Speaker Nancy Pelosi’s statement that insurrectionists were “armed” joked at the fact the two were suggesting that guns are the only real weapons. 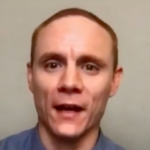 Meyers debunked their claim after prosecutors charged a fourth Capitol riot defendant with a firearms violation. He also pointed out that guns weren’t the only weapons at the siege; the insurrectionists armed themselves with clubs, spears, shields, bear spray, mace and other chemical irritants.

Meyers’ attack on Bartiromo came just days after another Fox News host, Sean Hannity, tweeted about the NBC host’s poor ratings. On Friday, Hannity wrote, “Seth you can’t even get 1 million viewers a night. Why you wonder? Your show sucks and you are not funny. You are locked into partisan politics of which you know nothing. It’s just a matter of time before your boring sh– show is cancelled….”

From the week of June 14 to June 20, Meyers’ show averaged 668,000 total viewers, according to Nielsen Media Research ratings data. Of those, only 209,000 were in the advertiser-coveted age demographic of 25 to 54. His direct competitor on CBS, James Corden, drew an average of 862,000, by comparison. Corden’s “Late Late Show” also averaged 204,000 in the demo, just under Meyers’ demo total.

Watch above, via NBC.