We got a new episode of “Late Night With Seth Meyers” on Monday night, and with it a new edition of Meyers’s staple segment, “A Closer Look,” which focused on Donald Trump’s latest attempt to take credit for something that President Obama did.

“Trump has spent virtually his entire term desperately trying to erase Obama’s accomplishments or take credit for them. Like when Republicans tried to repeal Obamacare, including its protections for pre-existing conditions. They even filed a brief with the Supreme Court in June! June! Arguing that Obamacare must fall, which would wipe out protections for people with preexisting conditions in the middle pandemic. And yet as all that was happening, Trump has repeatedly and brazenly lied about his position on health care,” Meyers said to get this thread going.

“So Trump has spent months lying about his position on health care. And on Friday his psychosis spun so far out of control, he actually tried to trick people into thinking he was issuing an executive order protecting pre-existing conditions, which is a thing that’s already law thanks to Obamacare, the law he’s currently in court trying overturn.”

“Late Night” then played a clip in which Trump made the declaration that “I’ll be pursuing a major executive order requiring health insurance companies to cover all pre-existing conditions for all customers.”

“Oh yeah?” Meyers heckled after the clip ended. “What’s next? You’re gonna issue an executive order requiring New Hampshire and Vermont to touch at all times?

From there, Meyers just kept the zingers coming.

Also Read: Seth Meyers: 'Even a Therapist Would Be Too Challenging for Trump' (Video)

“This psycho genuinely thinks he can just get up in front of the cameras and repeat things Obama already did, and people are going to believe him. Next he’s going to announce he‘s picking Joe Biden as his running mate,” Meyers joked.

“Dude, no one’s going to mistake you for Barack Obama. All we have to do is look at the two of you with your shirts unbuttoned. Obama looks like he’s in an episode of ‘Ballers,’ and Trump looks like a business ham.” 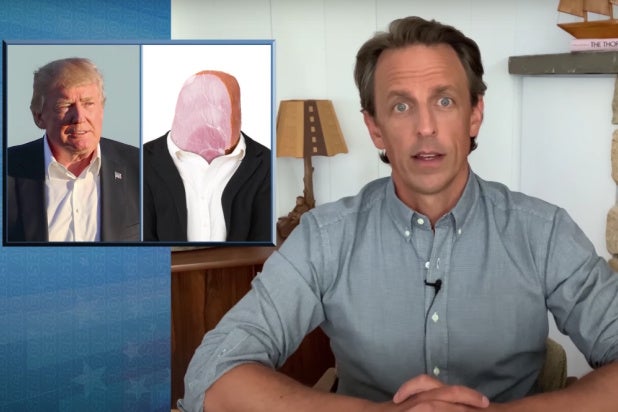 You can watch all of the “A Closer Look” segment from Monday’s “Late Night With Seth Meyers” in the video embedded in this article, or on YouTube here.