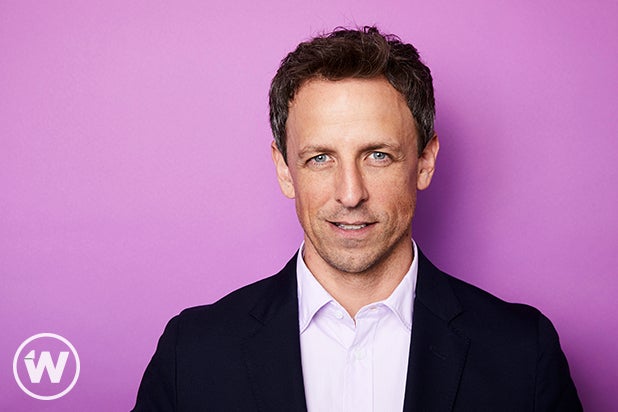 This story about Seth Meyers first appeared in the Comedy/Drama/Actors issue of TheWrap’s Emmy magazine.

Seth Meyers got into the late-night game less than five years ago, and it’s already a different world than the one he entered. That’s partly because Donald Trump is running the country now, and partly because Meyers decided to just steer into the skid there.

“We do talk about him, obviously, most shows,” Meyers said of how much his NBC series, “Late Night With Seth Meyers,” covers POTUS. “We probably talk about him more than everybody else combined. But at least, in our defense, he is the leader of the free world. So it’s not like we have seven Kim Kardashian jokes every night.”

And one day, he added, he’ll be free of this occupational hazard. “Trump takes up a fair amount of oxygen,” he said, “and I think we’ll just be happy to have it back.”

But after “Full Frontal” host Samantha Bee apologized in May for calling the president’s daughter Ivanka Trump a “feckless” C-word on her TBS show, it became more obvious than ever that topical comics can face severe backlash if they present their ripped-from-the-headlines humor in the wrong way. (Namely, a way that could make you lose advertisers, as Bee did.)

“My personal feeling is I’m really glad someone like Sam has a show,” Meyers said of his colleague. “I think she has this really powerful voice, a really unique voice. As to what she said, I feel like she probably put a lot of thought into it when she apologized for it, so then I sort of have to take that at face value as well.

“And as far as people reacting to it, I certainly wasn’t surprised. Like, the least surprising part of it was the reaction.”

Meyers has been at NBC since his days working on “Saturday Night Live” from 2001 to 2014. “We’ve had real support from the network,” he said. “I think we would hear from them if we did something that would run you away from that support. In general, though, we have conversations all day about what we want to say and how we want to say it. We want to make sure we say it in a way we can defend. And, ultimately, I feel like as long as we still have those conversations we’ll be fine.”

He laughed. “It’s just, ‘What are we gonna do?’ You go to bed the night before not knowing much about the show the next day. So you can’t lie there and say, ‘Well, we have this and that, and then we’ll do this.’ A lot of it’s like, ‘Well, I’m gonna walk in in the morning, there’s gonna be a lot of writers reading newspapers and writing jokes and hopefully enough of them will be good.'”

Though Meyers has been behind his “Late Night” desk doing bits like “A Closer Look” since taking over for his predecessor Jimmy Fallon in February 2014, he said he only really got the hang of things a year and a half into his gig, which is what his old “SNL” boss (and “Late Night” executive producer) Lorne Michaels predicted.

“My ego told me I could do it in six, and then it took fully 18 months,” Meyers said, laughing. “There is nothing more disappointing than when Lorne is exactly right.”

But Meyers credits his 15-year stint on Michaels’ long-running sketch series for preparing him for his current post–especially the latter years, when he served as head writer. “I still to this day cannot think of a job that would have more pressure to it than being head writer at ‘SNL,'” he said. “Which is great, to know that your hardest job is behind you, as far as making a plan every day and knowing there is a ticking clock.”

Meyers still feels the time crunch now, but to a more reasonable degree. Which is great, since he doesn’t plan on burning out any time soon on the show he’s been doing since early 2014. “It’s flown by,” he said. “It’s still really interesting to me. No part of me feels tired by the last five years, so hopefully I can keep doing it for a while longer.”

Read more of the Comedy/Drama/Actors issue of TheWrap’s Emmy magazine.