Late-night hosts were once again left in the dark on the big news of the day Thursday, with the report that Michael Cohen claims that Donald Trump knew about the infamous 2016 Trump Tower meeting in advance, which dropped well after they had taped their shows, but that didn’t stop Seth Meyers from delivering a killer “A Closer Look” on Thursday’s episode of “Late Night.”

At the heart of the segment, Meyers went in on Trump for a rambling speech he made to the Veterans of Foreign Wars of the United States earlier in the week in which the president declared that “We don’t apologize for America anymore. We stand up for America. We stand up for the patriots who defend America. And we stand up for our national anthem. We’re putting America first again.”

“Of all the things you can say about Trump, one thing you can’t say is that he’s normal. He can’t even stand normal. He puffs out his chest like a duck during a mating ritual,” Meyers joked. “Trump is a classic New York weirdo. If he weren’t president, he’d be the dude in Central Park feeding pigeons and naming them after the 1986 New York Mets. ‘I call this one Darryl. And this one’s Mookie. they’re my friends.'”

“But this a perfect example of how Trump tries to rewrite a narrative in the face of clear-cut evidence. He just tells his supporters not to believe that evidence. As he did during that same speech on Tuesday, when he told them not to trust what they see on the news. Trump was talking specifically about a segment he saw on NBC about the impact his trade tariffs are having on farmers.”

Meyers specifically referred to the part of the speech in which Trump said: “Don’t believe the crap you see from these people, the fake news. I saw a piece on NBC. It was heart-throbbing. They were interviewing people — they probably go through 20 and then they pick the one that sounds like the worst. But they went through a group of people — in fact, I wanted to say, ‘I got to do something about this Trump.’ Terrible. And that piece was done by the lobbyists and by the people that they hire. It was a total setup. This country is doing better than it’s ever done before economically… And just remember, what you’re seeing and what you’re reading is not what’s happening.”

“What you’re seeing and what you’re reading is not what’s happening. Trump is like a s—ty Jedi,” Meyers joked, as an image of Trump’s face shopped onto Obi-Wan’s body from the original “Star Wars” appeared on screen. 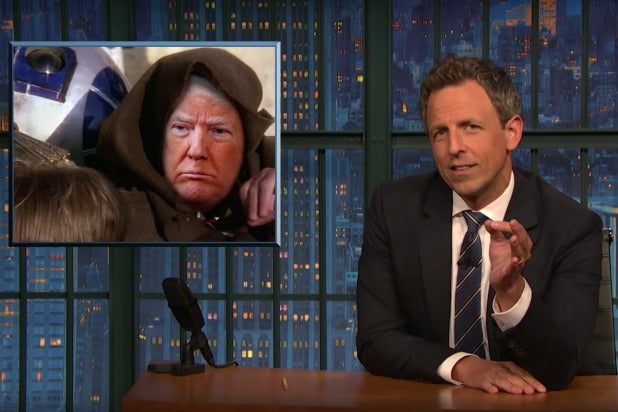 ” ‘These aren’t the droids you’re looking for.’ ‘Yeah, no, those are my droids, get out of here.’ Also, just to make sure we all heard it, can we go back to the start of that clip for a second?”

Then “Late Night” replayed the part of the previous clip where Trump described that NBC piece as “heart-throbbing.” Which, yes, was not a typo.

“Heart-throbbing? Why are you so weird, dude?” Meyers asked, as he shifted into an impression of Trump. ” ‘It was so heart-throbbing. totally butt-wrenching. I have to say, I was thumb-struck.’ It’s very clear you don’t know what heartthrob means. Were you mad at the piece or were you sexually attracted to it? ‘I was watching NBC. It was heart-throbbing. Our farmers are so sexy.’ ”

You can watch all of the “A Closer Look” segment from Thursday’s “Late Night With Seth Meyers” in the video embedded at the top of this post.