Seth Meyers questioned Republicans’ mental fitness during “A Closer Look” on Wednesday, Matt Gaetz in particular, after the Florida congressman’s rant at a recent hearing.

Gaetz accosted Secretary of Defense Lloyd Austin about what he believes is too much “wokeism” in the military at a Tuesday hearing. Gaetz also cited past military predictions about the war in Ukraine, and argued that officials “totally blew those calls” because of their focus on “wokeism.”

“Everyone else in the world seems to be developing capabilities and being more strategic,” Gaetz claimed. “We got time to embrace critical race theory at West Point, to embrace socialism at the National Defense University, to do mandatory pronoun training.”

“What is wrong with these people?” Meyers said. “In their fever-swamp brains, do they genuinely believe our soldiers no longer know how to fire a rifle because they’re buried in homework from pronoun class?” 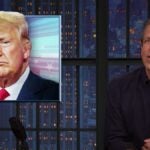 The late night host then took a moment to say that he mostly agrees with Gaetz’s purported original argument, which was that the military was asking for too much money.

“I would just like to point out that I have no problem with tough questioning of our national security officials, and I’m all for cutting the defense budget,” Meyers said. “It’s massively inflated and you could absolutely spend it better elsewhere, but that’s not even what the scam artists like Gaetz are asking for. They just wanna whine about wokeism and critical race theory, they don’t actually want to cut defense spending.”

You can watch Meyers’s full segment in the video here and above.