Seth Meyers is pretty sure no one could attack the U.S. better than U.S. citizens — including Russia.

During his monologue on Thursday night, Meyers took a moment to poke fun at the idea that Russia would attack the United States as a result of the sanctions President Biden put in place against the country due to its military action against Ukraine.

“After Biden imposed an initial round of sanctions against Russia, the Russian Foreign Affairs Ministry warned, ‘There should be no doubt that sanctions will receive a strong response.’ Come on,” Meyers joked. “You think you can attack us? This is America. We attack ourselves. We good.”

As he landed the punchline, Meyers made sure to put up an image of the Jan. 6 insurrection to drive his point home. You can watch his full commentary on the conflict between Russia and Ukraine in the video here and above. 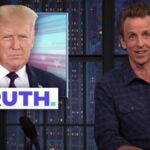 Elsewhere in his monologue, Meyers joked that Biden’s actions against Russia are already having an effect.

“In the wake of Russian President Vladimir Putin’s invasion of Ukraine, President Biden today announced the full scope of sanctions against Russia, including blocks on Russian banks that hold $1 trillion in assets, and their ability to business in dollars, euros, pounds and the yen,” Meyers explained. “Which explains why Russia just tried to buy a fighter jet with a picture of a bored ape.”

For those unaware, Bored Ape Yacht Club is a collection of NFTs depicting apes. Each one is wearing a unique outfit, but they always look bored. These NFTs have become popular with celebrities; Paris Hilton, Jimmy Fallon, and Justin Bieber are among the famous fans who each have one.

Putting on his best Russian accent, Meyers then joked that a Bored Ape “is good for one jet, no?”