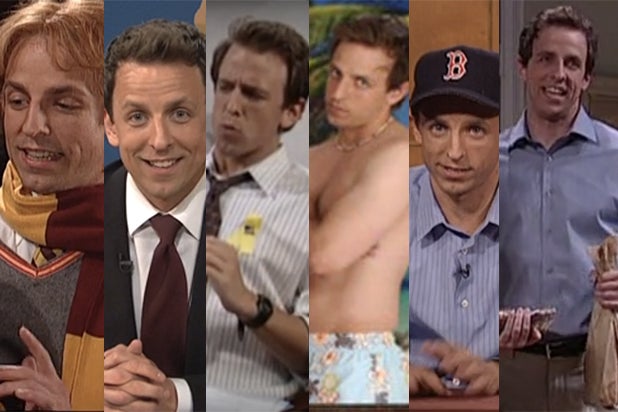 The funnyman won’t be going too far though — his new job as host of “Late Night With Seth Meyers” films in Studio 8G, literally just a few yards down the hall. What he leaves though is not just a great gig, years of memories, and a cast of friends — Meyers will leave his legacy behind as well.

The second-longest tenured cast member in “SNL” history (Darrell Hammond was there longer) had his thumbprint on nearly every moment that made viewers laugh over the past 12 seasons. In appreciation of Meyers’ talent and accomplishments, TheWrap celebrates 11 of his top “SNL” moments.

Garth and Kat: Mother’s Day
Meyers is often at his best playing the straight man to outrageous characters. Two such regular “Weekend Update” guests are Garth and Kat, played by “SNL” alums Fred Armisen and Kristen Wiig. They don’t do much rehearsing, but Meyers always has been a gracious host to the duo.

“Weekend Update”: Jacob the Bar Mitzvah Boy
Vanessa Bayer is brilliant as Jacob the Bar Mitzvah boy — another of the recurring characters that will be sad to see Meyers exit. Jacob is uncomfortable as it is, despite having seen Seth many times over. The young man, with an affinity for the Yankees, has a crippling fear of new “Update” anchor Cecily Strong — let’s see how this plays out.

“Weekend Update”: Stefon’s Farewell
Stefon is likely the most famous of the “Weekend Update” stoppers-by in recent years. When Bill Hader left the show last season, the world was forced to say goodbye to the beloved New York City party scene correspondent and his man-crush on Meyers. This wasn’t the best Stefon cameo, but it certainly had the highest production value.

Patriotic Briefs
Obviously this sketch is all about Will Ferrell. But today, it is about Meyers, whose first show was the one after Sept. 11, 2001. Here he is trying not to lose his mind with laughter at the sight of Ferrell’s … assets.

Big Bird on “Weekend Update”
“SNL” has seen a number of celebrity guests over the years, but perhaps the biggest of them all sat next to Meyers at his “Weekend Update” desk in October 2012 after Republican presidential candidate Mitt Romney said he had no problem cutting federal funding to PBS.

Tina Fey as Sarah Palin
Tina Fey joined the ranks of Will Ferrell’s George W. Bush and Darrell Hammond’s Bill Clinton impression when she returned to “SNL” to perfectly parody Sarah Palin alongside Amy Poehler as Hillary Clinton in the cold opening to the 2008 season premiere. Although the glory is all Fey’s, Meyers wrote the sketch with her and Poehler, and Fey often publicly credits Meyers for her most-popular impression.

Li-Lo as Hermione
Lindsay Lohan hasn’t had very many memorable roles since “Mean Girls,” but this 2004 “Harry Potter” parody in which she played a busty Hermione Granger opposite Myers’ awestruck Ron Weasley will probably go down as one of her best.

“The Couple That Should Be Divorced”
Sometimes it really seems like Meyers and Poehler are an item — especially considering the latter is the former’s first guest when he takes over “Late Night” on Feb. 24. And if that were the case, they probably would be divorced. Here the two show how that might look, complete with an enormous amount of bickering. But of course, there’s love there — just like an old married couple.