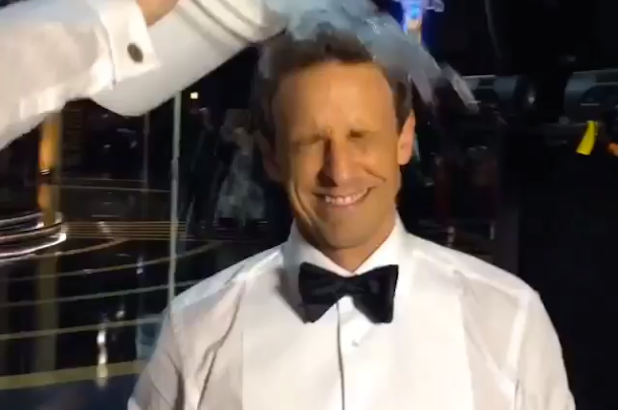 Nothing like a freezing cold shower after a night spent in the hot spotlight.

Emmys host Seth Meyers became the latest celebrity to accept the Ice Bucket Challenge, with the drenching coming immediately after the end of his big gig on Monday night. Though he usually strips down the moment his TV appearances end, Meyers was still clad in his tuxedo when the ice water rained down upon him, which means he’ll probably catch pneumonia at his after-party.

The ALS Ice Bucket Challenge has raised a totaled of $88.5 million since launching on July 29, according to a figure released by the ALS Association on Tuesday.

In other news, Meyers was quite solid in his first Emmys hosting duty, which was highlighted by several fun bits with Amy Poehler, a romp on the streets of New York with Billy Eichner and a monologue that likened TV to a late-night friend with benefits.