It’s probably still too soon for anyone to guess how the drama between Donald Trump and everyone in the United States will end, but it feels like Omarosa Manigault Newman’s secret recordings of conversations in the White House could be a tipping point. Which is hilarious, as Seth Meyers noted in a new edition of “A Closer Look” on “Late Night” Wednesday night.

“Omarosa’s tell-all book has a lot of sensational allegations, like her claim that she saw Trump put a note in his mouth,” Meyers said. “Now, this is Omarosa we’re talking about. So anything she says should be taken with a grain of lithium. But yesterday she dropped a new bombshell claiming that Trump knew in advance about the Hillary Clinton emails that Russia hacked during the campaign.”

Cue the video of Omarosa on MSNBC declaring that Trump admitted knowledge of those emails before they were released by WikiLeaks. Meyers, wrestling with this information, then listed off a cavalcade of very bad known things that have come to light before that somehow haven’t ended this thing already just to note its absurdity.

“Amazing. So after Trump’s public praise of Vladimir Putin, his attorney general’s meetings with Russians, his campaign chairman’s money laundering, his deputy campaign chairman’s tax fraud, his personal fixer’s secret shell company, his national security adviser’s lies to the FBI, his son’s attempt to get dirt from a foreign adversary and son-in-law’s secret back channels with that adversary, the person who could end taking down the president of the United States is Omarosa,” Meyers said incredulously.

“It took her 14 years, but she’s finally getting revenge for Trump firing her in season one. Now let’s be honest, the only fitting way for this presidency to end would be Trump to get indicted and leave the White House crying in the back of a cab. “

“Late Night” then displayed a doctored image of Trump himself experiencing the ignominy of being fired from “Celebrity Apprentice.” 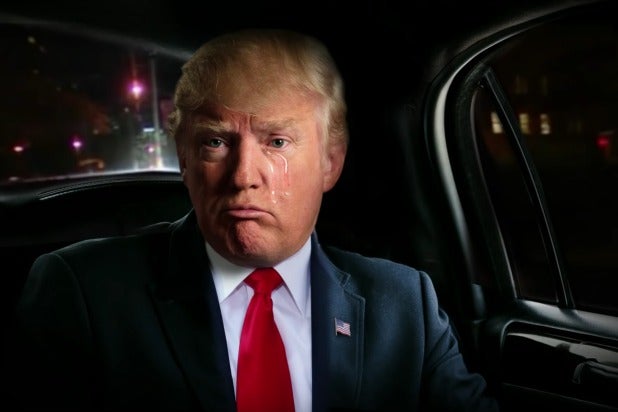 “Omarosa has also written in her book that Trump was furious that his son Don Jr, after Don Jr released his emails with Russians revealing that the infamous Trump tower meeting in 2016 was an attempt to get dirt on Hillary Clinton,” Meyers continued. “That contradicted their original story that the meeting was about adoption policy. Omarosa writes, ‘When I saw Donald that day, I said ‘I’m sorry to hear about Don.’ He said, ‘He is such a f—up, he screwed up again. But this time he is screwing us all big time.’ ‘

“Wait, so he just said this in passing during a conversation? Can you imagine making small talk with Trump in the elevator? ‘Hey, Donald. hot enough for you?’ ‘My son’s an a–hole.’ Now, Omarosa obviously has as much credibility as anyone else in Trump World, which is to say, very little. But she’s been releasing secret tapes of her conversations to back up her side of the story. In fact, she’s taped everyone, from John Kelly to Ivanka Trump to Jared Kushner to the president himself. Which is incredible given that, as we’ve noted before, Trump has a lifelong obsession with being secretly taped.”

Meyers continued by showing a video of Trump on “CBS This Morning” last year in which he blew off questions about what proof he had for his claim that Obama was secretly wiretapping him. At the end of the clip, Trump stormed angrily over to his desk in the Oval Office and, on camera, tried to look like he was reading some papers that he found there. Which prompted Meyers, after the clip ended, to eat one of his own pages of notes before concluding about Omarosa.

“Trump surrounded himself with grifters and con artists and now that it’s coming back to haunt him, he’s trying to grift his way out of it,” Meyers said. “It’s the first rule of Trumpism. Everyone is grifting everyone else and everyone eventually turns on Trump.”

You can watch all of the “A Closer Look” segment from Wednesday’s episode of “Late Night With Seth Meyers” in the video embedded at the top of this post.