On a new episode of “Late Night” on Thursday, Seth Meyers had a lot to say about the topic of the week: Republicans who work in the Trump administration trying to act like they’re doing important work by trying to frustrate Donald Trump, as seen in Bob Woodward’s book “Fear” and the explosive anonymous op-ed in The New York Times on Wednesday.

In a new “A Closer Look” segment, Meyers had harsh words for those people “who have loyally served him and agree with most of his agenda trying to cast themselves as heroic saviors protecting the republic from the whims of a madman.” And he also had some jokes for Donald Trump’s response.

“It’s easy to talk tough, but unless you’re actually willing to resign and tell the American people everything you know, then your tough talk is worthless,’ Meyers said. “John Kelly is like a kid who tells his friends he’s going to stand up to the bully who steals his lunch money and then when lunchtime comes, tells the bully, ‘Keep shaking, there’s more in my back pocket.’ ” 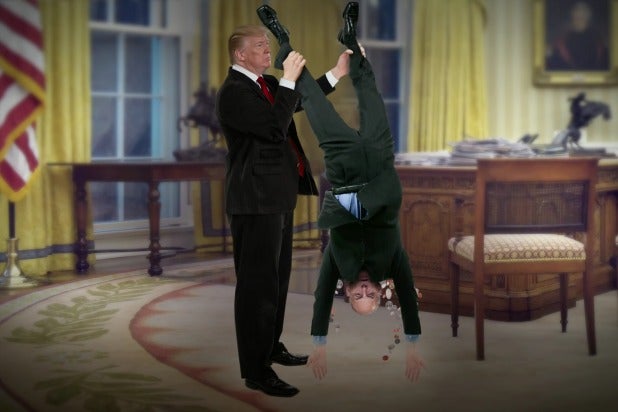 Meyers then went through the recording of Trump’s conversation with Woodward in which he complained about not being interviewed directly.

Also Read: Colbert: You Can't Mitigate Trump's Worst Inclinations 'Because All of Trump's Inclinations Are Tied for Worst' (Video)

“Now, Trump has denied all of this, and yesterday in the Oval Office he called Woodward’s book a work of fiction,” Meyers said. “But that’s not what he told Woodward on the phone when he called him just a few weeks ago to complain that he hadn’t been interviewed for the book. Woodward recorded the call and Trump was very complimentary.”

The first bit of the recording “Late Night” played saw Trump claim that “nobody told me about it, and I would have loved to have spoken to you. You know I’m very open to you. I think you’ve always been fair.”

“Oh my god,” Meyers came back. “How is there always a secret tape that contradicts everything Trump says? Although I guess I shouldn’t be surprised the same guy who can be tricked into not signing a piece of paper doesn’t realize everyone around him has a GoPro strapped to their heads. But, hey, in fairness to Trump, he probably didn’t know he was being recorded.”

Then “Late Night” played audio of Woodward telling Trump he was turning on his recorder and Trump said it was fine.

“He’s like a bank robber who waves at the security camera,” Meyers joked. “The craziest part of this phone call is when Trump explains that his aides never asked him if he wanted to do an interview with Woodward because they were too afraid.”

In this part of the audio, Trump said: “A lot of them are afraid to come and talk… but you never called for me. It would have been nice, Bob, if you called for me in my office. I mean, I have a secretary. I have two, three secretaries. If you would have called directly — a lot of people are afraid.”

Also Read: Seth Meyers Compares Trump to World's Dumbest Murder Suspect: 'I Didn't Kill Anyone, and Besides, It Was Self-Defense!' (Video)

Then Meyers summed up the weirdness of the whole situation.

“So to recap: Trump says Bob Woodward’s book is a work of fiction because he never spoke to Woodward because his aides were too afraid to talk to him about doing an interview for Woodward’s book, which is literally called ‘Fear.’ Trump is such a bad liar, even his lies prove that he’s lying,” Meyers said as he slipped into a Trump impersonation to drive the point home.

” ‘Your book called ‘Fear’ is totally inaccurate and I would have told you that if my aides weren’t too afraid to come talk to me.’ ”

Also Read: Seth Meyers Has One Big Question for Trump: 'Why Are You so Weird, Dude?' (Video)

You can watch all of the “A Closer Look” segment from Thursday’s “Late Night With Seth Meyers” in the video embedded at the top of this post.