For the third night in a row, there was just one topic on the minds of politically minded late-night hosts: Donald Trump’s policy that demands that immigrant children be separated from their families at the border. After a week of saying that this was Congress’s problem, Trump signed an executive order Wednesday that may end the practice. But Seth Meyers wanted to make sure you don’t give Trump too much credit for this move.

“Let’s be clear about one thing: you don’t get credit for solving a problem when you’re the one who created the problem,” Meyers said in a new “A Closer Look” segment on Wednesday’s “Late Night.” “You can’t eat half a cheeseburger, put it down, and say you’re a vegan. Especially when everyone knows you’re just waiting for people to stop paying attention so you can finish your cheeseburger. Now whether it’s the birther lie or the ‘Mexicans are rapists’ lie, or the idea that Democrats are responsible for separating families, Trump’s paranoid fantasies are a Rosetta Stone for understanding what’s happening right now.”

During the segment, Meyers recapped the past week, which included Trump and his people saying over and over that the family separation policy was actually something that Congress, and the Democrats specifically, would have to deal with. And also the various Trump supporters on Fox News acting like the outrage over Trump’s policy was over nothing and claimed that wasn’t a big deal that children were being locked in detention centers.

Also Read: Seth Meyers Figured Out an Easy Loophole to Get Rid of Trump (Video)

This is all, Meyers said, just what Trump does.

“The throughline of Trump’s political career is blindingly clear. He concocts racist lies, uses dehumanizing language to justify cruelty towards immigrants and outsiders,” Meyers said. “t wasn’t an accident, it wasn’t a law. it was a choice by Trump and his supporters. And lest you have any doubt at all about how the people who support this policy really feel, here is Corey Lewandowski, Trump’s former campaign manager, on Fox News last night.”

The clip in question, which went viral Tuesday night, saw Fox News panelist Zak Petkanas bring up the story of a 10-year-old girl with Down syndrome, only to be interrupted by a “womp womp” from Lewandowski.

Also Read: Colbert: Trump's Executive Order 'Is Not What He Wants You to Think It Is' (Video)

“Man, I thought when you showed a dick on TV, you had to blur it,” Meyer quipped, as this image appeared on screen next to him: 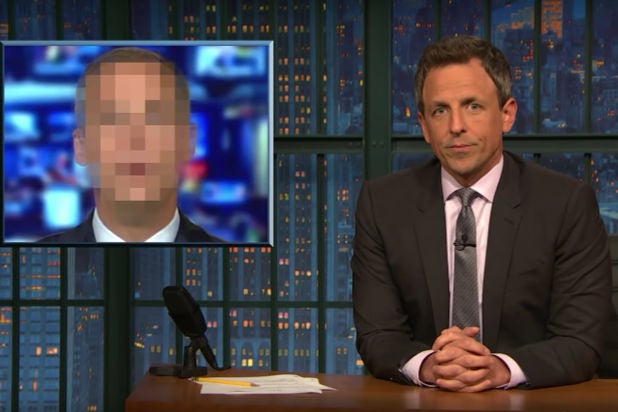 “You know, something you hear a lot on days like today, or days like yesterday, is ‘this is not who we are.’ But it is who we are right now,” Meyers said as he was closing the segment.

“It might change tomorrow or the day after that. But today we are this. And you personally may not be this, but who we are is too often decided by those in power. Which is why you vote. So remember, if you want who we are to match with who you are, you have to get up early and vote next chance you have.”

You can watch all of the “A Closer Look” segment from Wednesday’s episode of “Late Night with Seth Meyers” in the video embedded at the top of this post.