It’s a new week, and while Donald Trump may have been relatively quiet over the past few days, which gave Seth Meyers and his writing staff at “Late Night” time to dig even further into the most recent wave of scandals that the president has brought upon his administration.

During a new “A Closer Look” segment on Monday night, Meyers took aim squarely at how cartoonishly corrupt Trump and his circle continue to be — using Trump’s own appearance at a Republican congressional campaign rally last week, in which the crowd began a “drain the swamp” chant at Trump’s prompting, as the perfect illustration of the cognitive dissonance that is still going on among Trump and his supporters.

“I’m sorry, but after all your scandals the phrase ‘drain the swamp’ is now devoid of all meaning,” Meyers said. “You might as well chant ‘We Like Ike’ or ‘Brook-lyn Dod-gers.’ Trump’s cabinet has had one corruption scandal after another, and his personal fixer was literally selling access to the president. Trump didn’t drain the swamp — he bottled it and sold it as Dr. Trump’s Miracle Healing Elixir. In fact, in his next sentence, Trump actually claimed that his administration was fighting corruption.”

“Late Night” then played a clip of that next sentence, in which Trump claimed that “under my administration, we’re fighting against the lobbyists, the special interests and the corrupt Washington politics.”

“That’s right. He fought corrupt Washington politics and replaced it with the only thing that’s worse: corrupt New York politics. Seriously. Washington corruption used to be K Street lobbyists handing off bribes in parking garages. Now it’s shady ambulance chasers with mob ties funneling money through real estate and taxi medallions. I mean, look at these guys,” Meyers said as he pointed to an image of Trump, Rudy Giuliani and Michael Cohen that appeared on screen. 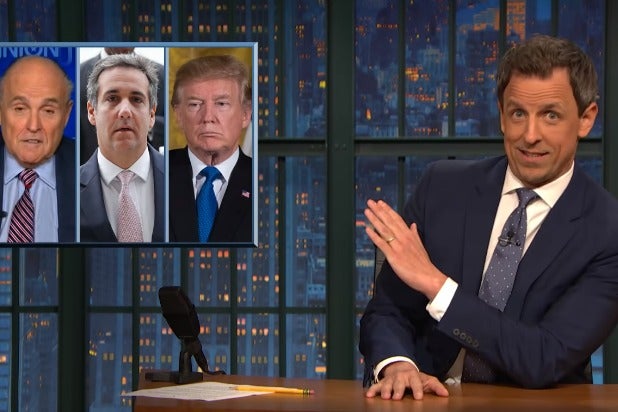 “They look like they should be playing cards in the back of a butcher shop waiting for someone to call them and say ‘It’s done.’ If they weren’t aides to the president, they’d have competing strip clubs outside of Secaucus.”

And to illustrate that point, Meyers reminded everyone of Cohen’s sketchy Essential Consultants shell company.

Then “Late Night” played a clip of CNN anchor Erin Burnett recapping the situation, describing Cohen as “aggressively pitching himself to potential clients” and mentioning how a Republican insider said that Cohen pitched himself by saying “I’m the guy you should hire. I’m closest to the president.” A comment that Meyers found amusingly credible.

“Man, it’s really sad when someone can believably say the person who’s closest to you is not your wife or your kids, but your lawyer,” Meyers said.

“I’m sure Trump has said to Eric, ‘Of course I love you, you’re like a lawyer to me.’ I guarantee you on his health insurance form, Trump’s emergency contact probably just says ‘Outside Legal Counsel.’ ”

You can watch all of the new “A Closer Look” from Monday’s “Late Night with Seth Meyers” in the video embedded at the top of this post.