The cavalcade of madness that has been this week in the Trump Administration did contain at least one positive item: the return of three Americans who had been imprisoned by North Korea. But the situation with North Korea remains fluid because Donald Trump is, well, Donald Trump. On Thursday's episode of "Late Night," Seth Meyers called Trump out for failing to even pretend to actually know what's going on in a new edition of "A Closer Look."

"Trump's attempts at diplomacy with North Korea are a positive development. And if the North and South manage to broker a peace deal with Trump's help that would be historic. But now some people are taking it five steps further and insisting that Trump deserves the Nobel Peace Prize, and he was asked about it yesterday at the White House," Meyers said.

"Late Night" played a clip of said question, with Trump's puzzling response: "Everyone thinks so, but I would never say it. You know what I want to do? I want to get it finished. The prize I want is victory for the world."

"Victory for the world? He doesn't sound like a Nobel Laureate. He sounds like a movie president fighting an alien invasion. 'I want victory for the world against the space bugs. One of whom won't leave me alone. Shoo, space bug,' " Meyers said as an image of Rudy Giuliani appeared on-screen.

Meyers then felt it was important to remind everyone that pretty much everything else Trump has said in the past couple years has been antithetical to what a Nobel Prize winner should theoretically represent.

"And, again, diplomacy with North Korea is good, but this is still the same guy who wanted to ban Muslims, called Mexicans rapists, said we should kill the families of terrorists and said he wanted fewer immigrants from Africa and Haiti. If he won a Nobel, his speech would be the first in history with an NC-17 rating," Meyers joked. "But okay, let's hear budding Nobel Laureate Donald Trump answer questions, in detail, about his upcoming summit with North Korean leader Kim Jong-un."

Also Read: Kimmel Gives Us a Glimpse At Exactly How Bizarre a Trump Nobel Prize Nomination Would Be (Video)

Next up was a clip of Trump, at the same meeting as the previous clip, being asked if something might happen that would "scuttle" the summit.

"Wow, soaring words. You get a more specific answer from Gmail's auto-reply," Meyers quipped as this image appeared on screen: 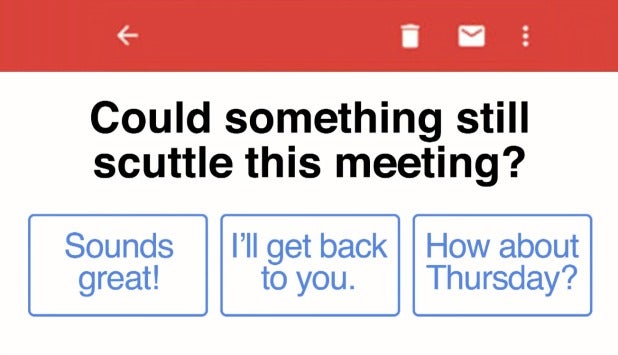 "Also, there's a chance he doesn't know what 'scuttle' means. 'Anything can be scuttled. Bananas. Sidewalks, you can scuttle them.' "

You can watch all of "A Closer Look" from Thursday's episode of "Late Night with Seth Meyers" in the video embedded at the top of this post.