Seth Rogen is wearing a lot of hats for his upcoming action movie, Columbia Pictures’ “The Green Hornet.” In addition to donning the mask of the popular radio serial hero and ‘60s TV star, Britt Reid, he’s co-writer and producer of the July 2010 summer film. A physically fit Rogen took some time to talk with TheWrap about his long-gestating project.

You look great.
Thanks. I have clearly been exercising, I have lost about 700 pounds.

Has it been easy getting into shape?
I hate it. It’s been a nightmare for me, and the  movie has been delayed around four months — which means I have to do it longer than expected. 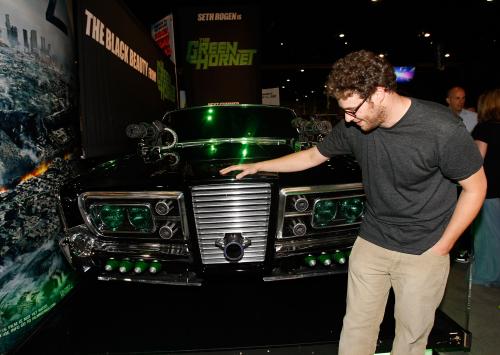 So, why “The Green Hornet”? It’s such a different role for you.
I have always been a huge comic-book fan and superhero fan, and as soon as we heard they looking for a writer, I just thought I could have a very interesting take on it. It’s really about a hero and a sidekick, which is really hard to write a movie about.

How closely does the new film follow the original story?
We explore the relationships a little more. We have kind of re-imagined how the Hornet comes into being, but I think it follows  the general plot of the TV series.

Did you pay to the fanboys?

We listened. And we studied the source material so we could just make educated decisions about what to keep and what to change. We wanted to make sure we knew what we were doing — and know what they would be pissed off about. If you’re a big fan of the original material, then you will be very pleased. But we also have a mandate that if you’ve never seen the original in any way shape or form, then you would like this movie. We knew that is how it would have to be.

Will it be campy?
No, we are not going for campy in any way shape or form. We want the relationships to have some comedy in them, like a lot of the great actions movies have. But as far as how we play with the action and the villains, we want it to be completely the best action movie out there.

What about rumors that Nicolas Cage and Cameron Diaz will star?
I can confirm that both of them may be in the movie. We are in talks with both of them, and it could very well happen.

How did Cage get involved?
We just start with which actors we are really big fans of, and he’s on that list. We were talking and we were like, "He’s awesome" — I mean, he plays so many different characters. It isn’t 100 percent going to happen, but it seems like a possibility.

Do you have a Kato yet?
No, I don’t. I would like to, but it’s a very big decision and we don’t want to rush into anything.

You officially unveiled Hornet famous car, Black Beauty, at Comic-Con …
We definitely followed a “if it ain’t broke don’t fix it” attitude with the Black Beauty. We went to a huge number of automakers from all over the world, and they pitched various designs, but when we looked at the designs, we would think that none of the designs were cooler than the original car was. We didn’t want to prove we were being imaginative for no reason, when we really all liked the look of the original.

What’s under the hood?
It’s a ‘66 Chrysler Imperial, like the original. Of course, we clearly added a lot of gigantic weapons to it that they didn’t have in the ‘60s, and we will thank our U.S. military for the advancements. But remember, this isn’t a movie about people with limitless technological powers. It’s a movie about guys who build it and then go out and fight crime. You want the car to reflect that.

What are some of the new weapons?
We have many giant flame throwers and missiles and non-lethal weapons like bean bag guns, and a very technologically advanced GPS systems and things like that. But we aren’t quite done yet.