HBO Max on Monday released the trailer for “Santa Inc.,” an upcoming eight-episode TV series from Sarah Silverman and Seth Rogen that stars her as a Christmas elf named Candy Smalls and him as her boss, Santa Claus.

At the top of the preview, which you can view the video above, Candy is super excited for the holiday and getting her coworkers equally amped ahead of Santa’s arrival: “When you’re a kid, there’s only one day a year more special than any other day and that day is Christmas. And we are the magic behind that day. So let’s get these f—ing kids some f—ing presents!” 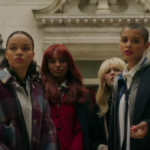 Then Santa, who is the coolest guy in snow biz, rolls up to greet his employees and many adoring (and some breast-flashing) fans.

“Good news, sir! More American kids believe in you than they do vaccines or the Holocaust,” Candy tells Santa. “That’s great! I mean, disheartening for America, but great for us,” Santa replies.

During a press conference, Old St. Nick is asked if he’s picked out the Santa who will succeed him: “Subtext: Santa is old and knocking on death’s door. F— you!” Santa shouts at the North Pole reporter. “I mean, good question, I’ll give it some serious thought. Ha, ha. Ho, ho, ho. Bye!”

This is when Candy starts to think about how the position of Santa has mostly been a white man’s gig, and she decides she wants to be the next chief of Christmas. But in order to get the gig, she’s going to have to impress Santa and his fellow old white men in charge.

“What I need to learn is how to bro out with these guys,” Candy says. “Shoot the s—. Do shots. Shoot shots of s—.”

While Candy pledges, “I’ll be named successor or die trying,” Santa seems to doubt her ability to take over: “She has ideas, but can she really be the face of Christmas?”

All eight episodes of “Santa Inc.” will launch Thursday, Dec. 2 on HBO Max.