While everyone was taking in “Robin Hood,” Oliver Stone and Woody Allen, I popped in at a couple of lesser-known international films that also have some buzz at Cannes. Both give their own special take on family relationships.
Based on the 1960 Korean film classic (directed by Kim Ki-Young) of the same title, “The Housemaid” is a stylized melodramatic, revenge thriller with a lurid plot spurred by the collision of conflicting agendas at play between a wealthy family and their hired help. 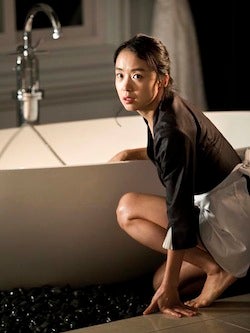 The story varies significantly from the original, but the basic premise of an affair between the nanny/maid and the man of the house — and its ramifications — remains at the core of this commentary on Korean society and the awkward relationship between live in servants and the families they serve.

In it, a young woman with a degree in child development goes to work for a wealthy family as nanny to their 6-year old Nami and helper to the mother, a delicate, fashionable beauty about to give birth to twins. She spends her days calmly, practicing pre-natal yoga and lounging on the couch reading (“The Second Sex”) in their palacial home. Macho husband/father, a wealthy businessman, plays classical piano and swaggers around the house indulging in red wine and baring his muscular chest beneath a silk robe.

Regimented, joyless family life plays out quietly against an austere, meticulously art-directed palette of blue, gray, black and white. The girl bonds with her loving new nanny; the bitter, older maid catches the father and nanny in a graphic sexual escapade and tells his wife the girl is pregnant. Enter the avaricious wife’s mother, who advises the cuckolded wife to stick it out, and she’ll eventually live like a queen.

“The Housemaid” seems to aim for Hitchcock or classic film noir but ends up closer to soap opera or camp territory with ripe lines like: “I should have pushed her from higher and ended things” or “I am rotten to the bone.”
In the Italian comedy “Parents and Children: Shake Well Before Using,” director Giovanni Veronesi examines the relationships between contemporary parents and their children and how the family unit functions when all the individual components are constantly and perhaps selfishly distracted by their own specific issues.
It starts out with the promise of fast-paced, witty dialog and amusing situations. A woman is cooking and talking on the phone to her 75-year old mother about why she would want to leave her 80-year old father at this point in their lives. “Its not that he doesn’t listen to you,” she keeps reassuring her mother, “He’s hard of hearing.”
This segues into a shrill argument between a father/high school teacher and his handsome, charismatic 18-year old son, who wants to pursue an audition for the reality show “Big Brother.”
The next day at school, the teacher assigns his teenage students to write an essay in the form of an honest instruction manual for how parents and kids should interact and respond to each other. One 15-year old girl, Nina, plunges into the assignment with relish and suddenly takes over as the film’s narrator.

It would seem, that at this point the film would turn into an assemblage of the voices of several students, explaining their family situations and methods of communication, or that we would at least see more on the original family we’ve been introduced to.

No. Instead, Nina’s story includes a single, anti-climatic event involving her teacher’s son and a killer whale and then goes on to detail her pursuit to lose her virginity, her 9-year old brother, who exhibits racist behavior at school and an estranged paternal grandmother who suddenly surfaces at the hospital where her mother works and becomes a guiding force in Nina’s life.
She also uploads a video of her divorced father stuttering through an embarrassing conversation about sex, and she drugs her brother with sleeping medicine – one of several plot points that go surprisingly without consequences or even a follow up.

In the end, “Parents” doesn’t have the sophistication it needs to sustain it as an adult film, but teens might enjoy and relate to it.