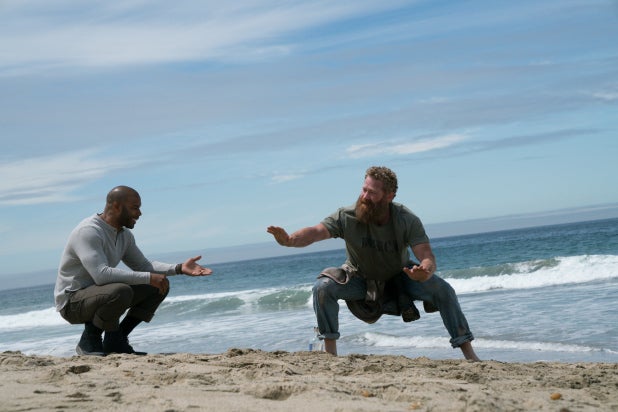 Homelessness among military veterans is a noble subject for a filmmaker to take on. So it deserves a better vehicle than “Sgt. Will Gardner,” writer-director Max Martini’s clumsy and sometimes downright laughable portrayal of an injured Iraq war vet.

“Sgt. Will Gardner” is Martini’s first film since 1999’s “Desert Son.” It opens with shots of waves and the American flag, along with the voiceover of Will (also Martini), who is locked in a motel bathroom and assumed to be a squatter by the police banging on the door. He quotes verse — specifically, “The Road Not Taken” — then we get a combat scene, then the cops breaking down the door. They drag him out in handcuffs and say, “Do you believe this guy? He’s something else!” Why he’s “something else” isn’t exactly clear, and the scene ends with Will reciting Walt Whitman’s “As I Ponder’d in Silence.” The stiff exchange, along with the poetry, set the stage for the rest of the film.

Robert Patrick then shows up to play a malevolent property owner in a scene whose timeline relative to Will’s arrest isn’t stated. Will asks if he has any odd jobs available, and when Patrick’s Tony says no, Will requests that they settle up for the work he has already done for him. Tony gives him less than what he owes, citing the fact that Will actually spent his time exercising, “and I caught you reading more than once!”

Will counters that these activities were performed on his breaks and furthermore, “The VA doc says to exercise to get my heart rate up to get oxygen to my brain. And they told me to read to take my mind off other things.” Tony doesn’t let him slide just because Will has a traumatic brain injury and lost his friend in the war. “Just like all of ‘em, lookin’ for a handout,” he says with a sneer. “Walk away, Will,” Will says as he does, indeed, walk away.

That’s not the end of their working relationship, however. Will returns to steal Tony’s new motorcycle — an action without repercussions — and rides it cross-country to visit a son he hasn’t seen for an undisclosed amount of time and whom he finds without effort, along with the boy’s mother, Kimmy (Elisabeth Röhm), who freaks out until she realizes it’s him. (She and a friend are in the same park as the boy, but far enough away that she drives her car over to confront Will, one of many details that don’t make sense.) The tortured dialogue continues.

Will also has a love interest. He first sees Mary-Anne (Lily Rabe) when he’s riding by just after she quits her job in a huff. (When she calls her boss a nimrod, he says, “Nimrod? I don’t know what’s happening to you lately, but you’re becoming completely unreliable!”) Then Will and Mary-Anne meet — or drive by — cute again and again. Mary-Anne is into Will because she thinks he’s, wait for it, Bryan Cranston. (Martini looks nothing like Bryan Cranston.)

Conveniently, when they finally talk, he tells her only his nickname, Ghost. So she sleeps with him, continuing to believe he’s Cranston, while he never notices even though she says things like, “You are so talented.” Weird thing to tell someone she’s only seen riding a bike, right?

“Sgt. Will Gardner” also has a magical-Negro problem. When Will’s friend Sam (Omari Hardwick) first shows up, it’s not clear that he’s a figment of Will’s imagination, the buddy who was killed in combat. But then we see him in odder settings, such as sitting in the corner of a room in front of a small, staticky TV while Will rages at life. (It’s a mystery where he is. There’s no indication that he had been invited to stay anywhere, and it’s not a motel room because the mattress is on the floor.)

Sam sings Will songs and counsels him through his grief, eventually saying something life-changing that allows Will to let go. There are a lot of speeches here, including one that Mary-Anne gives Will about her life and another that Will gives another homeless vet about standing proud.

The score and soundtrack can be classified as inspirational and country, respectively; the film has a decidedly red-state feel, even if politics are never explicitly brought up. (Though Gary Sinise shows up to offer a bit of slut-shaming regarding a regular at the establishment where his character tends bar: “Then she let the guys get all over her, and that done changed her.”) You can’t help but think of “American Sniper,” Clint Eastwood’s superior movie about the horrors of war and the inability of a vet to truly come home.

It’s heart-wrenching when Will tells yet another homeless veteran, “The VA’s a f—ing s—show, man,” as well as when Martini offers a postscript about the reality of vets and homelessness: you know these things are true. But “Sgt. Will Gardner” is its own kind of mess, one whose missteps are too distracting to allow you to feel sympathy for its characters for very long.