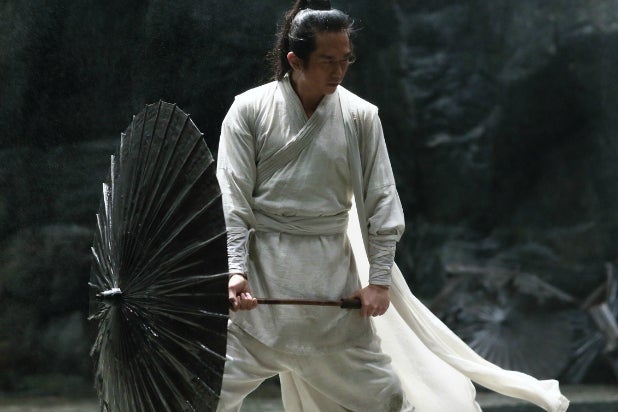 Grand spectacle has always been one of master Chinese director Zhang Yimou’s specialities. His wuxia epics feature staggering battles that defy gravity while placed within the context of intrigue-laden historical fictions. When you go see a Yimou vision, you are guaranteed big-scale entertainment paired with high-stakes drama and a dash of ancient wisdom.

That’s exactly what he delivers in marvelous fashion with “Shadow,” his latest lavish feature and one so rivetingly absorbing it could almost make us forget the misstep he had with the Matt Damon vehicle “The Great Wall.” Though largely similar to “Hero” and “House of Flying Daggers” in general form, this new effort sees the visionary storyteller operating in a slightly subtler mode, with fewer flying bodies and more philosophical concerns.

Two feuding kingdoms in this centuries-old saga, Yan and Pen, have a peace treaty that stands as long as the King of Pei (Ryan Zheng) doesn’t attempt to reclaim a city lost in battle. A complacent cretin, the King agrees not to stir the waters, thus ensuring his throne won’t be taken from him. Nonetheless, Commander Yu (Deng Chao), Pei’s greatest hero, has gone ahead and set up a mortal duel with Yan’s General Yang (Hu Jun, “Lan Yu”). The move earns the Commander a shameful demotion, but that’s part of the plan.

Also Read: Zhang Yimou's 'One Second' Will No Longer Be Presented at Berlin Film Festival

The Commander we first meet is nothing but a “shadow,” an imposter named Jing (evidently also played by Deng Chao), who looks exactly like the real high-ranking officer. But to an extent, the actual Commander, now a sickly-looking man, has become the shadow since he lives hidden in a secret lair plotting. Jing, who grew up and trained in martial arts with the Commander with the sole purpose of becoming his body double, is now the one who spends time with the Commander’s musically inclined wife, Madam (Sun Li, “Fearless”), and who’ll also be fighting the real battles.

More spiritually related than directly inspired by the 14th century novel “Romance of the Three Kingdoms,” the plot concentrates on the duality of existence, more explicitly the balance between yin and yang and all the opposing binary forces they represent. The symbol itself is predominantly present in “Shadow” and profoundly influences the film’s entire aesthetic. On a sensorial level, Yimou’s commitment to a strict color palette comprised of shades of blacks, grays, and whites is astounding to the eye and integral to the understanding of his central dual notion and the literal gray areas between them.

“Shadow” is a fantastic example of a filmmaker translating the core themes of his narrative into the very fabric of the visual art form. In every frame, the viewer is aware that this story is dealing with the inseparable forces of light and darkness.

Working in impeccable synchronicity with a trifecta of below-the-line artists — director of photography Zhao Xiaoding (“House of Flying Daggers), production designer Ma Kwong Wing, and costume designer (credited as “character designer”) Chen Minzheng — constructed the mostly monochromatic world which very piece of clothing, armature, prop, and use of light aligns with Yimou’s sensibilities on this project. Their contributions are much enhanced by digital effects that spawn awe-inspiring creations such as the Pei umbrellas, parasols built out of sharp and detachable daggers, which can also be use as shields or sleds.

Yimou tends to gracefully implement slow motion to accentuate action sequences, and if there are fewer set pieces in “Shadow” than in his previous works, they are on par, sometimes even surpassing them, in impact. Confrontations are few and far between, because most of the running time is devoted the twisty story; those that make onto the screen are nothing short of edge-of-your-seat-insanity. Gore galore is the name of the game.

True to his oeuvre, Yimou doesn’t push the female characters to the sidelines. Damsels in distress are obsolete in his violently beautiful realms: Princess Qingping (Guan Xiaotong) and Madame are both skilled warriors whose abilities get put to use in the bloody tale. Keeping in tune with the themes of duality, Zhang, who co-wrote the screenplay with Wei Li, reiterates the value of embracing feminine energy even for the most rugged of soldiers.

Western standards of nuance don’t apply for wuxia performances, which are always a tad large-than-life. These turns are not entirely theatrical but also not understated or realistic in the way that American viewers might expect, and that’s part of what makes them so captivating. In a deliberate and suitable casting choice, Deng Chao in a dual part gets to personify both the “shadow” and the legitimate identity of a man. The role turns exponentially more enthralling as Jing, the “shadow” whose purpose is to reconnect with his long lost mother, defies his master.

A marvel of cinematic craftsmanship, “Shadow” acts curiously as both a return to form for Zhang Yimou and a perceptible departure. Not only are his characters more physically grounded, but his writing also seeks more ties to emotional reality even if the stories are still far from commonplace. With a single stroke, the king of wuxia exuberance can both orchestrate a thoroughly engrossing legend and convey essential truths about life.