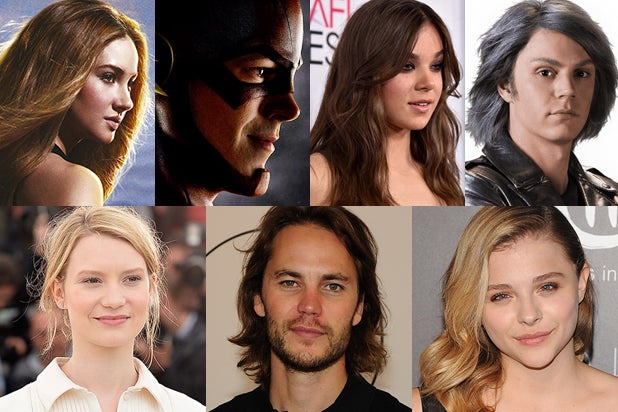 Landing a role in “The Hunger Games” must have seemed like a golden ticket to the plethora of young actors and actresses clamoring for a handful of roles. And with the franchise now poised to have another $150 million opening weekend with “The Hunger Games: Mockingjay – Part 1,” life certainly is good for Jennifer Lawrence, Josh Hutcherson, Liam Hemsworth and company.

But for some of those who failed to secure roles in the franchise, it wasn’t all doom and gloom, at least not for long.

Actors and actresses like Shailene Woodley, Mia Wasikowska, Grant Gustin and others have gone on to find success of their own and proven that there is life after losing out on “The Hunger Games.”

Below are seven of the most successful “Hunger Games” losers who are still coming out winners.

Shailene Woodley was one of dozens and dozens of young actresses who met with filmmakers for the role of Katniss, but unlike many of Jennifer Lawrence’s other competitors, it didn’t take long for Woodley to land a hell of a consolation prize. She must have impressed Lionsgate execs during her Katniss auditions because they cast the actress as the lead in their next big YA franchise, “Divergent.” And while other YA adaptations were conquered at the box office, “Divergent” broke the streak and emerged victorious with a $50 million plus opening weekend. Sequel “Insurgent” is now filming, with Part 3 “Allegiant” set to be split into two movies. Woodley is also getting plenty of love from audiences and critics alike for her roles outside the franchise, particularly in the John Green adaptation, “The Fault in Our Stars.”

Grant Gustin went from bit player on “Glee” to the star of “The Flash,” but in between the two gigs, it seemed like he might end up landing the role of Finnick Odair in “The Hunger Games: Catching Fire.” The role ultimately went to Sam Claflin, but a year later, Gustin showed up on another shortlist — for the role of Barry Allen, aka DC superhero The Flash, for a potential new series that would spin off from The CW’s popular “Arrow.” A week later, he had the role, and in October 2014, “The Flash” debuted as the most watched program in the history of the network.

Before Jennifer Lawrence came out of seemingly nowhere to land the role of Katniss, most media outlets doubled down on Hailee Steinfeld as the likeliest candidate to play the Girl on Fire. At the moment, Steinfeld was a 14-year-old first-time Oscar nominee for the Coen Brothers’ “True Grit,” and she couldn’t walk a red carpet without being asked about whether she might end up with the part. Awkward. Like Woodley, Steinfeld also ended up in a different YA franchise for Summit/Lionsgate, although “Ender’s Game” didn’t do quite as well as “Divergent.” Steinfeld’s stuck mostly to more grounded dramas and comedies since, and her next big studio franchise might just be “Pitch Perfect 2,” the sequel to the 2012 Anna Kendrick musical comedy. If the film is as successful as the first, Steinfeld’s character is poised to take over as the leading lady.

Josh Hutcherson ended up playing Peeta Mellark in “The Hunger Games,” but among the blond-haired young actors who tested for the part opposite Lawrence was Evan Peters, then best known for having played Aaron Johnson’s best friend in “Kick Ass.” More genre projects would lie in Peters’ future, and now he’s made a name for himself playing different characters on all four seasons of hit FX anthology series “American Horror Story.”  He’s also known for a scene-stealing turn as mutant superhero Quicksilver in “X-Men: Days of Future Past.”

Jena Malone has made a kick-ass Johanna Mason in “The Hunger Games: Catching Fire,” but during the casting process, Australian actress Mia Wasikowska also emerged as a possibility. Though she made her name in Tim Burton‘s “Alice in Wonderland” — and is returning for the upcoming sequel — Wasikowska has gone on to find more success in interesting, smaller projects from respected auteur directors like David Cronenberg (“Maps to the Stars”), Jim Jarmusch (“Only Lovers Left Alive”) and Guillermo del Toro (the upcoming “Crimon Peak”).

The “Friday Night Lights” star fits the physical description of Finnick Odair, but Taylor Kitsch was quick to shoot down rumors that he might take the role in “The Hunger Games: Catching Fire.” While we’ll never know if he turned it down or Lionsgate turned him down, we do know that Kitsch’s own first attempts at headlining franchises in “John Carter,” which happened in 2012 at around the same time Finnick was being cast, didn’t quite work out. Kitsch returned to smaller films and has perhaps his biggest break yet to look forward to. He’s been cast as one of the leads on the highly anticipated second season of HBO’s “True Detective.”

Just 13 while Katniss was being cast, Chloe Moretz nevertheless voiced her enthusiasm for the role, telling the LA Times, “I’d die to play Katniss. It’s such a cool role.” It wasn’t meant to be, but Hollywood is still banking on Moretz. She’ll even get her own shot at a potential “Hunger Games”-esque YA franchise, as Sony cast her as the lead of alien invasion thriller “The 5th Wave,” based on the bestselling books by Rick Yancey.

“The Hunger Games: Mockingjay” is in theaters on Friday, Nov 21.