It was known that Marvel Studios’ “Shang-Chi and the Legend of the Ten Rings” would set a new Labor Day weekend record… but not by this much.

After grossing an excellent $29.6 million from 4,300 screens on Friday, industry estimates now have the latest MCU film grossing $70.8 million over the 3-day period — which would match the opening of “F9” earlier this summer — and a stunning $86 million 4-day launch. That would nearly triple the previous record set 14 years ago by Rob Zombie’s “Halloween” with $30.5 million.

Given that a film of this scale has never released on Labor Day weekend before and the chaos of pandemic box office tracking, projections had been conservative at around $45 million for the 4-day period. While the current, wildly high estimates could go down as the weekend progresses — Disney is projecting a $75-85 million total — the result will still be one of the strongest launches of the year on par with fellow MCU film “Black Widow.” 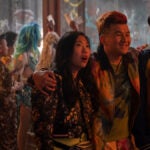 Unlike “Black Widow,” “Shang-Chi” is not available as a premium title on Disney+, instead releasing in theaters only for 45 days. With little major studio competition through September, “Shang-Chi” could leg out very well during this theatrically exclusive run, which would be a boost for movie theaters trying to convince Disney to join the trend of studios recommitting to a shorter theatrical exclusive window instead of the day-and-date strategy used during this post-shutdown period.

Disney has also seen success from theatrical exclusivity with 20th Century Studios’ “Free Guy,” which is currently third on the weekend charts with $2.1 million grossed on its fourth Friday and an estimated $11 million 4-day total. That would bring the original comedy’s domestic cume to just under $95 million, putting it on course to become the first film not based on a previously-existing IP to gross $100 million in North America since theaters reopened.

Meanwhile, Universal/MGM’s “Candyman” is holding decently despite competition from “Shang-Chi,” dropping 52% from its $22 million opening for a $10 million 3-day/$12 million 4-day second weekend total and a $41 million domestic cume. The film gave director Nia DaCosta the distinction of being the first Black woman to direct a film that opened to No. 1 on the box office charts, an achievement she is likely to repeat when she joins the MCU with “The Marvels” in November 2022.