Spoiler alert: This post contains major spoilers from “Shang-Chi and the Legend of the Ten Rings”

“Shang-Chi and the Legends of the 10 Rings,” Marvel’s first film with an Asian lead and cast, is full of cultural and mythological references.

While the titular “Legend of the 10 Rings” is a tale created for the film, other elements are rooted in Chinese culture — both traditional and modern.

Here are the Chinese customs from “Shang-Chi” explained, in order of appearance:

When Shaun (Simu Liu) visits Katy (Awkwafina), he joins the family for breakfast. Rather than cereal, they eat rice porridge, also called jook or congee. A simple and plain dish, jook is often paired with youtiao (Chinese donuts). Before entering their house, Shaun removes his shoes outside — a common custom in Asian households. The reason? To not track in outside dirt and grime. Oftentimes, residents will wear house slippers for use indoors only.

Production designer Sue Chan, who is of Chinese descent, also added many other staples in Chinese households, including a rice cooker and hot water dispenser.

Day of the Dead

While at Katy’s house, her waipo (maternal grandmother) mentions gathering items for the Day of the Dead. During the Qingming festival, which typically takes place in April, families visit the grave sites of deceased love ones to pay their respects. The graves are swept and cleaned, and families often leave offerings of fruits, flowers and other items (including worldly vices like alcohol and cigarettes).

On the flight to Macau, Shaun reveals his real name is actually Shang. Katy jokes about how close the two names sound, but it’s quite common for immigrants to pick anglicized versions of their Chinese names: Shang becomes Shaun; Mei-Ling (a popular girls name) becomes May or Melissa.

After arriving in Macau, Shang and Katy meet local handler Jon Jon (Ronny Chieng). Katy professes to not being able to understand Chinese well, to which Jon Jon replies, “I speak ABC.”

“ABC” is short for American-born Chinese, a (sometimes derogatory) term used to describe children of immigrants who speak English as their first language and may not understand Chinese or Chinese customs.

One of the most formidable opponents Shang encounters is the Death Dealer (Andy Le). Clad in blue robes with a white face, Death Dealer never speaks during the film. His white face is a callback to Chinese opera where white masks represent death.

Death Dealer and the Ten Ring assassins employ a variety of martial arts weapons, from basic staffs and spears to more exotic or advanced ones, including throwing knives and hook swords (which are put to good use during the scaffolding fight, which you can watch below).

Shang’s younger sister Xialing (Meng’er Zhang) is the master of a rope dart, a hybrid weapon that can be used as both a dagger and a whip. The weapon’s versatility is important in the final battle in Ta Lo.

Shrines to the dead

After Shang-Chi is captured by his father, Wenwu (Tony Leung), and brought to the Ten Rings camp, we see a shrine to Li (Fala Chen), Wenwu’s wife and Shang and Xialing’s mother. Shrines to the dead are very common in Chinese households. They typically consist of a framed photo of the deceased with offerings of fruit (similar to those made on the Day of the Dead) and burning incense.

A shrine mirroring the one in the Ten Rings camp is also seen in Ta Lo. Wenwu visits the shrine to pay his respects to Li before trying to free “her” from captivity (in reality, he is being lured by a malevolent evil).

Guardian lions appear throughout the film: in the Ten Rings camp and at the gates of Ta Lo. These pairs of statues are erected to ward off evil. Many Chinatowns, including in San Francisco and Vancouver, have guardian or foo lions at their gates.

Within the mystical land of Ta Lo, these majestic beasts come to life and roam the countryside.

The most revered creature in Chinese mythology is the dragon. In fact, those born in the Year of the Dragon (2012, 2000, 1988, etc.) on the Chinese zodiac are considered especially lucky.

Dragons are a recurring element in “Shang-Chi” — Shang and Xialing’s necklaces are actually the “eyes” of the dragon statue that illuminates the path to Ta Lo. Once in Ta Lo, Yin Nan (Michelle Yeoh) recounts the myth of the the dragon to her nephew Shang.

During the climatic final battle, the warriors of Ta Lo use weapons and armor forged from dragon scales. And Shang summons a giant dragon, The Great Protector, to his aid.

“Shang-Chi and the Legend of the Ten Rings” is out in theaters now. 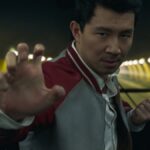 Also Read:
Simu Liu Explains the ‘Mosaic’ of Martial Arts Styles Used in ‘Shang-Chi and the Legend of the Ten Rings’ (Video)