After another solid hold in its third weekend in theaters, Marvel Studios’ “Shang-Chi and the Legend of the Ten Rings” is set to pass the domestic box office total of “Black Widow,” a feat likely made possible by its status as a theatrically exclusive film.

The latest MCU film added $5.8 million on its third Friday and, according to industry estimates, is set to earn $20.5 million this weekend, bringing its total to $175 million and putting it on course to pass the $183 million total of “Black Widow” this coming week. While “Black Widow” was well-received by critics and audiences, “Shang-Chi” has received universal acclaim and now has a chance to become the first post-shutdown film to gross over $200 million in North America.

Aside from Marvel, the box office is falling into a lull period that likely isn’t going to be broken until the arrival of “Venom: Let There Be Carnage” and “No Time to Die” in early October. Warner Bros.’ “Cry Macho” is the only new entry in the Top 5 this week, grossing just $1.6 million from 3,967 screens on Friday and earning an estimated $4.5 million opening that’s just below the $5-10 million studio projections. Currently, the neo-western sits third on the charts behind 20th Century’s “Free Guy,” which earned an estimated $5 million in its sixth weekend. 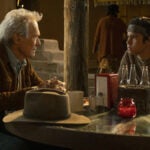 “Cry Macho’s” opening is a far drop for Clint Eastwood at the box office from the $17 million opening earned by his last film, “The Mule,” in 2019. But it was to be expected as the older audiences that usually show up to his films have the option to watch “Cry Macho” on HBO Max.

Streaming numbers for Warner Bros.’ 2021 films have been on levels consistent with its box office performance, but it remains to be seen if there will be a disparity for “Cry Macho” thanks to older audience showing interest but watching the film at home. Critics have been mixed on the film with a 53% Rotten Tomatoes score, but audiences have been slightly more positive at 67% with a B on CinemaScore.

Just outside the Top 5 is Open Road’s action film “Copshop,” which is estimated to earn a $2.4 million opening from 3,005 screens. Starring Gerard Butler and Frank Grillo, the film has a 79% critics and 67% audience score on Rotten Tomatoes.