Alec Baldwin had arrived in town. The Oscar stage was set. The red carpet was being laid on Hollywood Boulevard …

… And inside the producers’ office at the Kodak Theater, Adam Shankman grabbed a sandwich and Bill Mechanic picked up a fistful of cold medication. 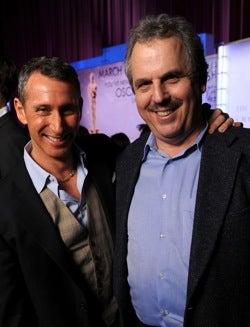 He shrugged. “But we’re in good spirits.”

With four days to go until the 82nd Academy Awards, which the two men are co-producing, Mechanic and Shankman sat with TheWrap to talk about the show, rumors that they aren’t getting along — and how the Academy made it impossible for them to keep the Oscarcast under three hours.

THE TROUBLE WITH THE ACADEMY
Mechanic concedes that he won’t meet his original goal of a three-hour show.

But the fault, he said, lies with the Academy.

“I made a vow that we would get to three hours exactly, and we will not,” he said. “But I was really close to it. It’s just that there are things that are beyond your control.”

He sighed, and chose his words carefully. “There were things that were taken off the show that were then put back on the show. Things that broke a sense of honor.”

Shankman cut in. “The Academy took stuff off, and then they made us put it back in. On top of which, we were trying to be creative about seating and shoe leather and all of that, but we could not do certain things because of Academy dictums.”

ONE BIG SURPRISE
“There is something on the show that I literally can’t believe we’re getting on the show,” said Shankman, laughing. “It’s not going to be a big deal for the audience, but to the town and the people who are Oscar aficionados … It feels naughty.”

“Rude is my word,” added Mechanic.

AND ANOTHER…
They’ve already stirred up talk, by eliminating the performance of the nominated songs and by hiring 69 dancers (many from the show on which Shankman serves as a judge, “So You Think You Can Dance”) for two dance numbers. 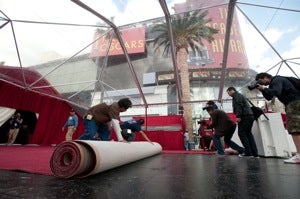 The big one, they say, will open the show. Other than that, they won’t provide many details about the opening — though Mechanic insisted that reports of a Neil Patrick Harris/Martin Short routine are misleading.

“Anyone who is expecting something right now will be wrong,” he said.

“All I can tell you is that it is the greatest star opening I have ever seen." said Shankman. "It makes me laugh, it makes me happy, I love it so much it makes me crazy.”

GOING FOR THE EMOTION
The acting categories will involve a variation on what producers Bill Condon and Lawrence Mark did last year, in which five previous winners individually saluted the nominees in each acting category.

This time, though, Mechanic and Shankman are going not with former winners, but with presenters who have ties to each of the nominees.

“It’s people they’re friends with, or have worked with, or respect,” said Mechanic.

“I believe you’ll have more emotion in the show from all that, as it weaves its way through. And if there are stories that evolve during the evening, I want us to be able to follow them. We’ve built the show so that if it’s ‘Avatar’ vs. ‘The Hurt Locker’ vs. ‘Up in the Air’ vs. ‘Inglourious Basterds,’ the way the nominations are ordered will theoretically allow us to see and feel that earlier in the show.”

BREAKING THE BOUNDARIES
Though he has taken some flack for his “So You Think You Can Dance” crew, Shankman insists that the musical numbers are part of a considered strategy.

“Part of the musical element is there to bring a young audience to the show,” said the man who also directed “Hairspray,” with Zac Efron. “Young audiences like that stuff. And so I‘m trying to really serve that, in an incredibly uncorny way, with dignity and freshness.”

Reaching a broader audience, added Mechanic, was a key to the show’s bookings — and to film packages that will reportedly include a tribute to horror films.

“We’ve probably gone further than anybody has ever gone in terms of stretching the boundaries and recognizing all different kinds of movies,” he said. “The Oscars tend to represent a certain kind of movie, although this year it’s serendipitous that the nominees have fed a wider appetite.”

RUMORS, RUMORS …
Shankman and Mechanic said they’re constantly surprised by the inaccurate reporting about the show, the mania for spoilers and the attention on stories like the one that said they weren’t getting along.