“Shark Tank” star Kevin O’Leary, in response to a fraud lawsuit filed Wednesday, says his name and likeness were used without his permission.

O’Leary, a regular star of the ABC unscripted series, and former “Shark Tank” guest Kevin Harrington were both named as defendants in the lawsuit, brought by a group of entrepreneurs who say they fell victim to an investment scam connected to the duo.

The plaintiffs claim two companies purportedly run by Harrington and endorsed by O’Leary, InventureX and Ideazon, offered consulting to businesses looking to enter the crowdfunding space. “The truth: These companies turned out to be nothing less than facades designed to lure in unsuspecting victims, extract their money and then virtually disappear under the guise of delays, minimal to no performance, and no results,” the lawsuit reads.

“It appears that someone has been using my name and likeness without my knowledge, permission, or consent,” O’Leary said in a statement through his attorney. “I’ve never heard of any of these purported companies and have never conducted business with any of the plaintiffs who filed this suit. Obviously, I want to get to the bottom of it too, as my rights have been violated. We will make sure that the bad actors are held accountable.” 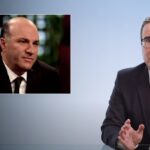 The suit describes Harrington as “partner and primary executive” of InventureX, having sent personalized videos to each plaintiff “in order to lure the Plaintiffs to sign up and/or continue paying fees.” O’Leary, according to the suit, endorsed the companies and their “fake executives” by name.

“Defendant O’Leary’s name and reputation by way of endorsement can actually be bought by simply filling out a short form and paying a fee, where he will endorse people without knowing anything about the person or the person’s business, including whether or not they exist,” the lawsuit says.

The plaintiffs’ attorney Tre Lovell issued a statement in response to O’Leary’s claim that his likeness was stolen. “The statements of Mr. O’Leary came directly from videos where he discusses both InventureX and Ideazon, and specifically endorses principals of each company, by name,” Lovell said, noting that transcripts of the videos featuring O’Leary were included in the complaint.

The plaintiffs, who claim to have been scammed out of “hundreds of thousands of dollars,” are suing for fraud, negligence, breach of written contract and intentional infliction of emotional distress.