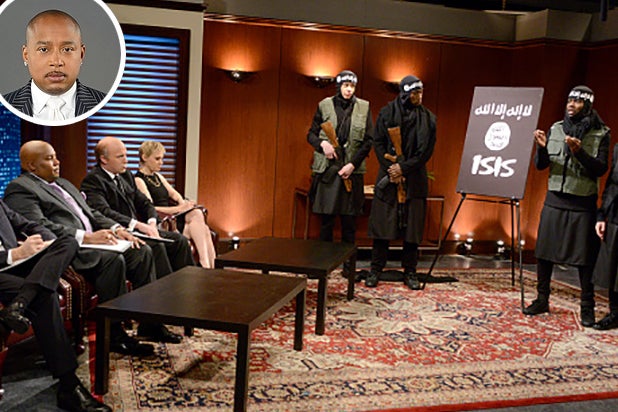 “Shark Tank’s” Daymond John has some choice words about this past weekend’s Chris Rock-hosted episode of NBC’s “Saturday Night Live.”

“I can’t really say that I was excited about the topic,” John told TheWrap about the show’s “Shark Tank” spoof that featured four ISIS terrorists, led by Rock, pitching their idea to destroy “Western pigs and vile Jews.”

While the parody drew laughs in some corners, John was less than impressed.

“I found it a little insensitive but I liked the fact that I was the one who saved the world,” he said during an interview about the success of the show.

That wasn’t the only problem. John also took issue with Rock’s 9/11 jokes during his opening monologue about New York City’s newly opened Freedom Tower, located at the exact spot where the Twin Towers once stood.

“They should change the name from the Freedom Tower to the ‘Never Going in There’ Tower, because I’m never going in there,” Rock said. “There is no circumstance that will ever get me in that building. Are you kidding me?” Adding, “What are they thinking? Who’s the corporate sponsor, Target?”

Rock wasn’t finished and joked, “They better put some mandatory [businesses] in there — stuff you can’t get out of — like the IRS, family court, DMV…”

But John doesn’t think terrorism is funny. “For someone whose offices are at the top of the Empire State Building, we get terrorist threats often, as well as losing several friends during 9/11. I was not that happy about what was on the show.”

Many “SNL” viewers were unhappy about the skit as well, and voiced their displeasure on Twitter.

So first Chris Rock "jokes" about 9/11 and the Boston Marathon bombing in his monologue, then an ISIS skit. Think this is my last #SNL

NBC has yet to respond to TheWrap’s request for comment.

You can watch the “SNL” ISIS parody below.