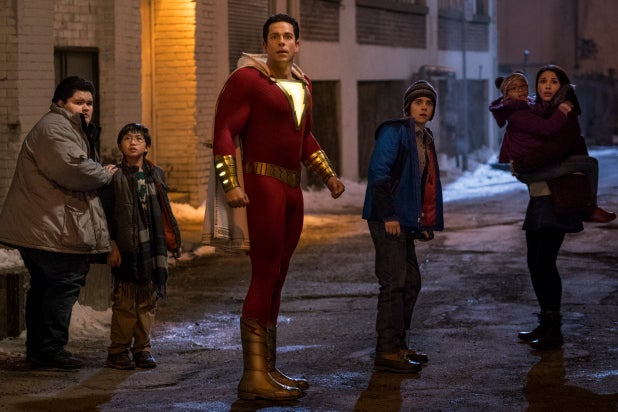 Warner Bros/New Line’s “Shazam” will easily hold on to the No. 1 spot at this weekend’s box office, as it is on pace for a second weekend total of $22.5 million and a 10-day total of $92 million.

But the other comic book film new to theaters, Lionsgate’s “Hellboy,” looks like it is going to flame out with an opening weekend total of just $12 million after making $4.93 million on Friday. That’s below the $17-20 million projections set for the R-rated reboot and below the $23 million opening made by the original “Hellboy” in 2004.

While Guillermo del Toro’s two “Hellboy” films became cult classics, the $50 million reboot starring David Harbour and directed by Neil Marshall (“Game of Thrones”) is getting weak reception from both critics and audiences. It has been panned on Rotten Tomatoes with a 15% score, and received a 2.5 star score on Postrak and a C from opening night audiences on CinemaScore. By comparison, the first “Hellboy” received a B-, while its 2008 sequel, “The Golden Army,” received a B.

“Hellboy” had been expected to be the top opening of the weekend, but as it falls to third on the charts, that honor will go to Universal/Will Packer Productions’ “Little” with a $15 million opening against a $20 million budget, making $5.3 million on Friday.

The film sports African American women both in front of and behind the camera, with Tina Gordon Chism directing a cast led by Marsai Martin, Issa Rae and Regina Hall. While critics were mixed with a 50% Rotten Tomatoes score, the film got four stars on Postrak and a B+ on CinemaScore.

Holdovers complete the top five, with Paramount’s “Pet Sematary” making $9 million in its second weekend for a 10-day total of $40 million, while Disney’s “Dumbo” adds $8.5 million in its third weekend to bring its total to $89 million.

Farther down the charts, Aviron/Voltage’s romance “After” is set for an opening of $7 million from 2,138 screens, a decent start for the $14 million adaptation of Anna Todd’s novel. The biggest disappointment this weekend is United Artist/Laika’s “Missing Link,” which is looking at a $5.6 million opening and a ninth place start despite an 89% Rotten Tomatoes score and a B+ on CinemaScore.

That will be the lowest opening ever for Laika, 56% below the previous low of $12.6 million set by the studio’s last film, the Oscar-nominated “Kubo and the Two Strings.”