The expected deal with the Aspen district attorney will insulate Sheen from any future ramifications from the Christmas Day incident with wife Brooke Mueller.

"They are working out the details, but they've definitely come to an agreement on Estevez  pleading guilty," an individual close to the case in Colorado told TheWrap. Sheen's real name is Carlos Irwin Estevez. 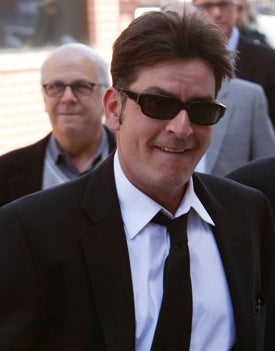 The individual did not have any specific information on how much, if any, jail time Sheen would serve.

The "Two and a Half Men" star was arrested on Dec. 25 under his real name after police responded to a 911 call from Mueller claiming that he was trying to kill her.

Sheen was originally charged with menacing, a class five felony; criminal mischief, a class one misdemeanor; and second-degree assault. The latter has been reduced to third-degree assault in a Feb. 8 court decision.

On March 15, the actor appeared in the Aspen court to plead not guilty.

Serious plea-bargain talks have been going on between Sheen's lawyer and the Aspen district attorney since late April.

On May 7, TMZ reported that a plea deal was in the works but that it was hung up over whether Sheen — whose lawyers did not want a long probation for fear of violation troubles — would serve jail time and how long that imprisonment could be.

Officially, lawyers on both sides are playing deflection to stories of any deal in the works.

"I'm not hired to respond to rumors," Sheen's Aspen lawyer Richard Cummins told TheWrap. "I'm hired to work on Charlie's case. Rght or wrong, as they often are, rumors are someone else's department to respond to."

Arnold Mordkin, the Aspen Deputy D.A. handling the case, said he had "no comment" on Sheen pleading guilty, on any potential deal or the jail time the actor could serve. "I can't keep track of all the rumors surrounding this case," Mordkin said. "Rumors are just that, rumors, and I don't where they get started."

When contacted by TheWrap, Sheen's publicist, Stan Rosenfield, said he had heard of the rumors but: "I do not comment on rumors."

The next hearing, on motions introduced by the defense, is scheduled for June 18. If there is no agreement beforehand, Sheen's trial is to start July 21 in Aspen.

If found guilty, Sheen, who has not yet decided if he will return to his hit CBS sitcom for another season, could face up to five years in jail.