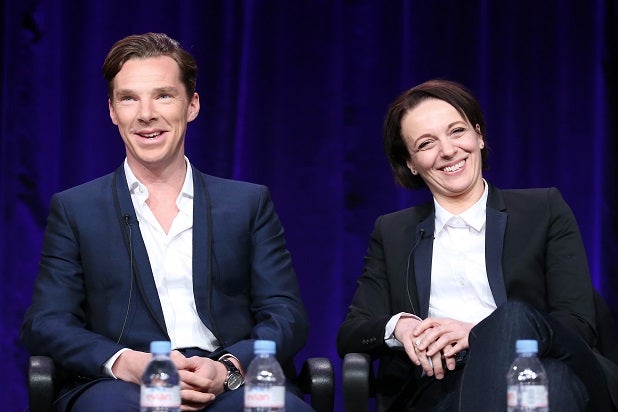 Cumberbatch was on hand to discuss the series at the Television Critics Association press tour in Pasadena, Calif., on Monday. Among the topics discussed was how long the series — which premiered its third season on PBS on Sunday night — might last.  A straight answer wasn’t forthcoming from the panel, but executive producer Steven Moffat suggested that the show will go on, unless its star gets too big for the drama.

“Ben Stephenson, who is the head of drama at the BBC, has commissioned it for 50 years, he said, just to settle this question,” Moffat cracked. “Yes, it will continue until Benedict gets too famous.”

“He gets precious and just doesn’t want to do it,” added “Sherlock” producer, and Moffat’s wife, Sue Vertue.

During the panel, Cumberbatch (who juggles his “Sherlock” duties with big-screen roles in the “Hobbit” franchise and “Star Trek Into Darkness”) added that he’s not in danger of burning out on the iconic sleuth character like some of his predecessors, noting, “I’m younger than any of them were or are.”

Also helping Cumberbatch to not burn out on the role: The fact that he easily sheds the part when it’s time to leave it behind. Sort of.

“Yeah. Well, sometimes. No,” Cumberbatch hedged, when asked if the role is always with him. The actor did allow, however, that “I felt really sentimental about letting him go this time, which I normally don’t because he’s very hard. I love him to bits, I love the results, sometimes, but it’s hard work. And this time I felt really sentimental about it.”

Cumberbatch did, however, admit to inadvertently slipping into Sherlock mode on his off-hours during the show’s early days.

“On the first series I was going from London on the train, and I got very interested in smudges on people’s lapel,” Cumberbatch offered. ” I knew fuck-all about it back then … I thought, ‘Oh, here’s a clue!'”