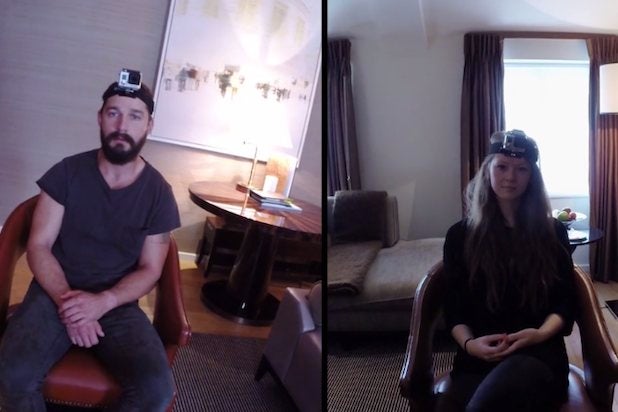 Shia LaBeouf was so committed to staying silent during his #IAmSorry art exhibit last Februrary that he didn’t protest when a woman attending it stripped off his clothing and “proceeded to rape” him.

The “Fury” star made the startling claim during a lengthy email exchange with a Dazed journalist, who eventually interviewed him in person by sitting silently across from him, while GoPro cameras were strapped to one another’s foreheads.

“One woman who came with her boyfriend, who was out side the door when this happened, whipped my legs for 10 minutes and then striped my clothing and proceeded to rape me,” LaBeouf wrote in the #INTERVIEW published on his website, TheCampaignBook.com. “Then [she] walked out with her lipstick smudged to her awaiting boyfriend, who I imag[ine] was quite hurt by it. All this happened in front of hundreds of people. It was really terrible.”

LaBeouf doesn’t detail the involuntary sex he’s alleging, but did say it complicated his relationship with his girlfriend, at the time. The “hundreds of people in line” could apparently tell the unidentified woman had some sort of sexual encounter with LaBeouf because of her “disheveled hair and smudged lipstick.”

“Yea, it was no good. Not just for me, but her man as well. On top of that, my girl was in line to come see me because it was Valentines’ Day and I was living in the gallery, sleeping in a sleeping bag, for the duration of the event,” LaBeouf wrote. “We were separated for five days, no communication, so it really hurt her as well, as I guess the news of it traveled through the line. She was only about 25 people back.”

“When she came in she asked for an explanation and I couldn’t speak, so we both sat with this unexplained trauma, silently,” LaBeouf continued. “It was painful. The hardest part of the show. It fucked our Valentine’s Day.”

INTERVIEW from Rönkkö / Turner on Vimeo.