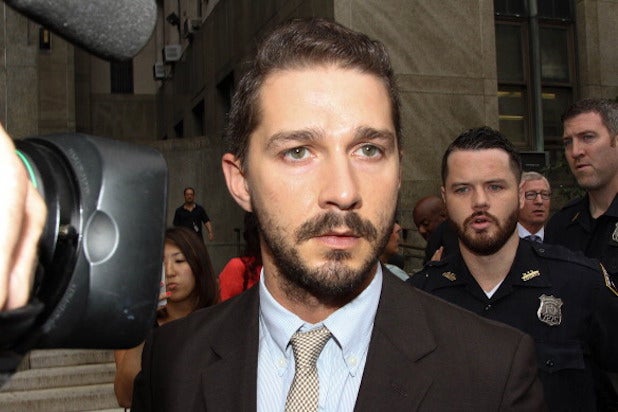 Shia LaBeouf has opened up about his arrest last July after a drunken altercation with police, during which he yelled racial comments, telling Esquire in a profile published Tuesday, “I f–ked up. “

“What went on in Georgia was mortifying,” LaBeouf said. “White privilege and desperation and disaster … It came from a place of self-centered delusion … It was me trying to absolve myself of guilt for getting arrested. I f–ked up.”

LaBeouf, who was arrested for disorderly conduct and public drunkenness in Georgia, called a police officer a “dumb f–” and “stupid b—,” according to police body-cam footage obtained and published by TMZ.

And then things got racial, as LaBeouf declared, “You got a president who don’t give a sh- about you, you’re stuck in a police force that don’t give a f– about you and you want to arrest white people who give a f–, who ask for cigarettes?”

“You’re going to hell, straight to hell, bro,” LaBeouf also told an African American officer in video of the arrest.

Asked by another officer why LaBeouf thinks his colleague is going to hell, LaBeouf replied, “Because he’s a black man. … That means a whole lot, bro.”

In October, the actor was ordered by a judge to attend an anger management class.

In the Esquire profile, LaBeouf also reflected on his blockbuster run in the “Transformers” film franchise, saying that he quickly got sick of doing them.

LaBeouf appeared in three “Transformers” movies from 2007-2011, all of which were critically panned but made more than $3 billion worldwide at the box office. But he told Esquire that he thinks the franchise is “irrelevant” and “dated as f—“

“You come up on these stories about ‘Easy Rider’ and ‘Raging Bull’ and De Niro and Scorsese and Hopper, and you find value in what they do. Meanwhile, you’re chasing energon crystals,” LaBeouf said.

“It’s very hard to keep doing what you’re doing when you feel like it’s the antithesis of your purpose on this planet,” LaBeouf added.

Since then, LaBeouf has left the blockbuster world far behind, and it looks like he won’t be coming back, as the screenwriter of the next “Indiana Jones” film says he won’t be bringing back LaBeouf’s character from “Kingdom of the Crystal Skull” for another round.

Instead, the actor has moved on to European-produced arthouse films like “Borg McEnroe.” Made by Danish director Janus Metz Pedersen, the film stars LaBeouf as the hotheaded tennis player John McEnroe and follows his on-the-court rivalry with Bjorn Borg.

Meanwhile, back in the world of Autobots and Decepticons that LaBeouf left behind seven years ago, the latest “Transformers” film, “The Last Knight,” had the lowest domestic box office haul of any installment in the series last summer with $130.1 million. That’s down 68 percent from the high point in the franchise, “Transformers: Revenge of the Fallen,” which LaBeouf starred in back in 2009.