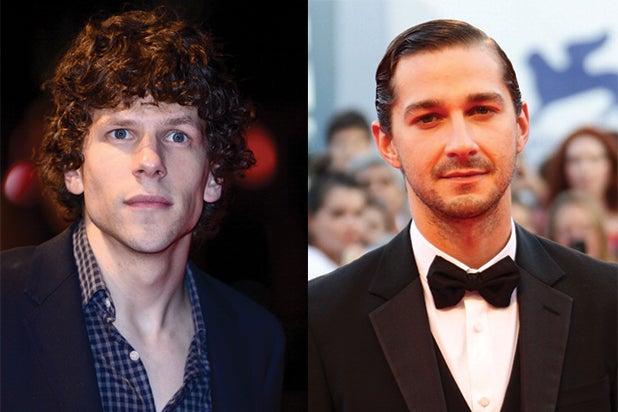 Shia LaBeouf and Jesse Eisenberg are in talks to star in Todd Phillips‘ next movie “Arms and the Dudes,” multiple individuals familiar with the Warner Bros. project have told TheWrap.

Neither actor has an actual offer yet, but LaBeouf has been Phillips’ top target for more than a month, a fact that TheWrap held for both sides as a courtesy out of respect for the filmmaker’s casting process.

LaBeouf and Eisenberg are poised to play a pair of potheads who become unlikely arms dealers when they win a $300 million contract from the government to supply America’s allies in Afghanistan with weapons. As one might guess, the situation spirals out of control and the two find themselves way out of their depths.

Jason Smilovic wrote the script, which is based on a Rolling Stone article by Guy Lawson. Phillips will produce with Mark Gordon, while Bryan Zuriff will executive produce.

Those who thought LaBeouf was jeopardizing his career with a series of publicity stunts earlier this year should think again, as the actor remains in high demand as buzz grows louder surrounding his performance opposite Brad Pitt in David Ayer’s WWII movie “Fury.”

As for Eisenberg, Warner Bros. has been keen to stay in business with the “Social Network” star, who is currently filming the role of Lex Luthor in the studio’s superhero movie “Batman v Superman: Dawn of Justice.”