Shia LaBeouf and Megan Fox didn’t just return to the screen for the $200 million “Transformers” sequel, “Revenge of the Fallen.” They also returned to help bring their characters to life for Activision’s second ‘Transformers” videogame, also called “Revenge of the Fallen” and due out Tuesday — the day before the $200 million Michael Bay movie hits the big screen. In addition to recording original dialogue, spare-time gamers LaBeouf and Fox were asked for their input on how to make the game better than the first one. They talked about the improvements, as well as getting really blown up in the new movie and what Steven Spielberg would rather do than shoot skeet.

So what does Michael Bay do to top himself this time?

The biggest explosion in film history?

MEGAN: The biggest explosion where the actors were involved. Shia, Tyrese Gibson and I had to run through a 1,000-pound gas bomb. It took them months to set it up and rig the dynamite — that’s not something that many people can say that they’ve done. 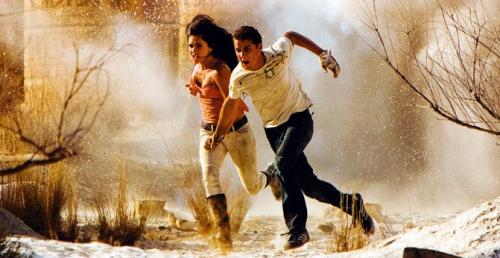 The videogame must have been a breeze after that.

MEGAN: Actually, it’s harder to do the voice for the game.  It’s easy to scream and act terrified when you’re running through a 1,000-pound gas bomb. It’s not so easy to do that sitting in a padded room all by yourself.

Did you guys play videogames on the set of “Fallen”?

MEGAN: I tried to get Shia to play “LEGO Star Wars.” He wouldn’t even tolerate getting past Start. He has no idea what an awesome game it is. It’s not a kid’s game — it took me months to beat it. There are so many hidden things that you need to beat it. But he and Ramon Rodriguez, who plays Leo in the film, did a lot of boxing and NFL games and those types of super-manly things, all that testosterone-driven s–.

SHIA: Steven has been making videogames for a long time. “Medal of Honor” is his. In fact, he’s a videogame fanatic. I remember coming to his house one time to go skeet shooting. I walked into his office, and he had not moved from his desk for the last seven hours. And in my mind I’m going, “Well obviously he’s working on something real important. He’s typing something really special and the world’s going to change when he gets up.” And the next sentence that comes out of his mouth is, “I can’t get past level 7 on ‘BioShock.’” The man’s been sitting there for seven hours playing “BioShock.” His eyes are starting to water.

Let’s get to the important stuff: Megan, do you look better in this game?

MEGAN: They used the same images from last time — Shia and I did full body scans and facial scans, and they were updated.

You had input in the new “Transformers” game … 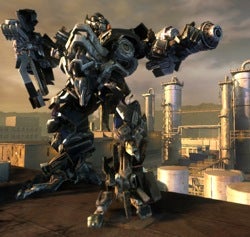 SHIA: The first game, just like the first movie, a lot of it was trial and error. There were a lot of cool aspects to it, and a lot of destruction — but the stakes weren’t high enough. There was no ticking clock. You had endless time to figure out missions. This game’s not like that. The other issue was that you couldn’t play other people. I couldn’t say, “I’ll be the Decepticon, you be the Autobot. Let’s go at it!” This time you get that multiplayer aspect.

MEGAN: Yeah, you can take the Autobots and Destructicons online and do battle. And the visual effects are obviously better because technology has improved.

SHIA: I have very high expectations for the new “Prince of Persia” (with Jake Gyllenhaal). That has one of the most solid storylines I’ve played in a game — I’m interested to see what they do with it. But game movies aren’t hot, normally. I don’t like where the entire intention of the game is to make a film, because then you sacrifice the game. That’s what they did with Vin Diesel and “Wheelman” (a new game that will become a John Singleton film). 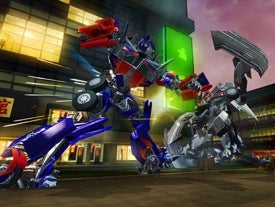 What about the other way around, when videogames are based on movies?

SHIA: I liked what they did with “The Matrix,” where they had separate storylines that converged with the movie in the game. I’d like to see them do more of that … more interaction.

And the new “Revenge of the Fallen” game?

SHIA: The attention to detail is very high, and just like the movie, it’s been infused with a bunch of new faces. A lot of the updates you have in the movie you have in the game. But the cool thing, honestly, is that “Transformers” has a very specific tone. Yes, it’s crazy-ass action, but there’s also levity. You have to have pauses. If it’s all action you don’t have time to appreciate it. The game is the same way. As action-packed as it is, there’s still storyline, and there’s still humor in it.

MEGAN: The interaction between the robots and the city and the gamescape is kind of mind-blowing.