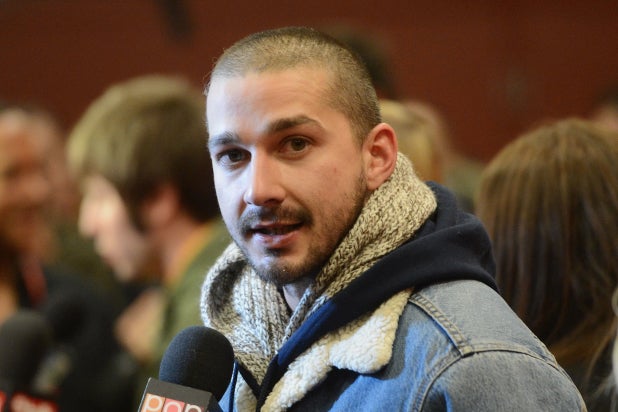 Embattled actor Shia LaBeouf has finally come clean on his weeks and weeks of bizarre behavior, claiming that it’s all been one giant piece of performance art.

LaBeouf claims #stopcreating – the hashtag he used to mark his many Twitter apologies – is a project created with the help of “Meta-Modernist” Luke Turner, screenwriter of “Training Day” and “End of Watch” David Ayer, and Kenneth Goldsmith, who in 2013 was appointed the Museum of Modern Art’s first poet laureate.

Perhaps the “Nymphomaniac” star doesn’t remember that Joaquin Phoenix – who was nominated for an Academy Award (but not for this) – beat him to the punch by five whole years, and kept up the act throughout 2009 in service of Casey Affleck‘s mockumentary “I’m Still Here.”

The actor revealed his master plan on Twitter Monday night in two long posts, which have been since been deleted. Though his motives are unclear, LaBeouf’s intentions may have been to start a conversation about the immutability of art and imitation.

“The problem with American artwork, is a problem of subject matter. Artwork keeps getting entangled with the problems of America itself,” LaBeouf wrote in the first post, titled “Twitter As Art,” which was screen captured  on the internet before being deleted. The second post is a lengthy manifesto on what performance art (or a#RT) is.

“Performance art has been a way of appealing directly to a large public, as well as shocking audiences into reassessing their own notions of art and its relation to culture,” he continued.

“My twitter ‘@thecampaignbook’ is meta-modernist performance art. A Performative [sic] redress which is all a public apology really is.”

He also said his acts of plagiarism were all intentional and served to both open a dialogue about “plagiarism in the digital age” and allow him to release his “authentic creative imagination.”

“All art is either plagarisum [sic] or revolution & to be revolutionary in art today, is to be reactionary. In the midst of being embroiled in acts of intended plagiarism, the world caught me & I reacted,” LaBeouf wrote by way of explanation. “The show began. I became completely absorbed, oblivious to things around me.”

At the end of the post, LaBeouf thanked his audience and offered yet another performative redress.