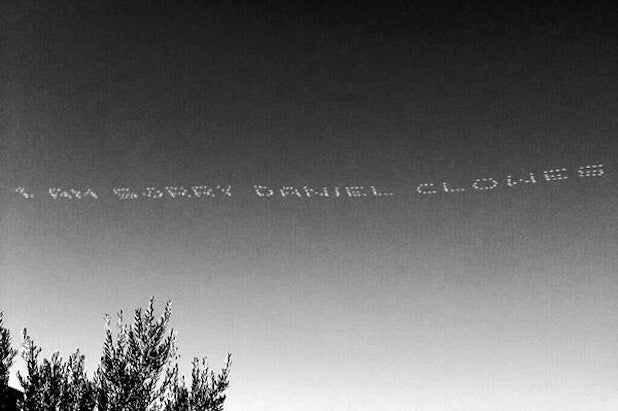 Shia LaBeouf‘s latest cryptic burst of apology to Daniel Clowes was a mere 20 characters, and clear as the blue Southern California sky.

But somehow, we still have no idea what he’s up to.

LaBeouf tweeted a photo of a sky-writing message he apparently commissioned to appear over Los Angeles on Wednesday, as SoCal celebrated New Year’s Day with several high-traffic events around town — including the Rose Bowl.

“I am sorry Daniel Clowes,” was all it read. The tweet was less direct.

So is he really, really sorry, or is he carrying on a petulant campaign of overreacting to overreaction? LaBeouf has been raked over the coals in the media and over Twitter after it was revealed that his short film “HowardCantour.com” was largely lifted from “Justin M. Damiano,” Clowes’ obscure 2007 comic book.

In the two weeks since, LaBeouf has fired off several tweets that were purportedly a continuation of his profuse apology — or were they? It turned out that many of his missives were themselves plagiarized, suggesting some kind of bizarre performance art.

So is this an elaborate stunt? In one breath, Shia says it isn’t …

I am sorry for the hurt and pain that my actions caused. This is not a publicity stunt.

… and in the next, the tart tongue returns:

You have my apologies for offending you for thinking I was being serious instead of accurately realizing I was mocking you.

At this point, only Shia knows what Shia is really thinking. While his intentions remain ambiguous, our headache is very, very real.