The first three installments of the eight-episode series will debut globally on Apple TV+ on April 29, with subsequent episodes dropping each Friday.

Moss, who serves as a director and executive producer on the series, stars as Kirby Mazrachi, a Chicago newspaper archivist who survives a brutal assault. When she learns that a recent murder resembles her attack, she partners with seasoned but troubled reporter Dan Velazquez (Wagner Moura), to track the perpetrator. Phillipa Soo and Amy Brenneman co-star.

The MRC Television series is based on Lauren Beukes’ best-selling 2013 novel and was adapted for television by showrunner Silka Luisa. 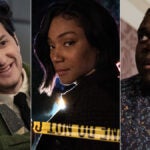