When Patricia and Terry Phelps decide to move their family to a remote town in Connecticut for a new start following her indiscretion with a handyman, things immediately start to get weird in Starz’s “Shining Vale.” The well-reviewed horror dark comedy, which bowed last week with a two-episode premiere and continues Sunday nights on the network, quickly distinguished itself by packing in – rather successfully – storylines with teeth.

The overarching arc follows the couple as they reestablish their family’s lives in a creaky old house that only Pat (Courteney Cox) seems to recognize is haunted (by Mira Sorvino). But it quickly finds Pat’s feelings and emotions looked at through the lens of her mother Joan’s (Judith Light) ongoing mental illness while she engages in couples therapy with Terry (Greg Kinnear), conducted by a male practitioner. At home, Pat, who has been struggling with writer’s block, finds herself overmedicated as she attempts to follow up her nearly two-decade-old romance novel bestseller. Add to that the bizarre and creepy hauntings by Sorvino’s Rosemary, and you get a half-hour and a bit show with a lot of layers. And that’s just the start.

Executive producer Sharon Horgan (“Catastrophe,” “Divorce”), who wrote the series with her fellow EP Jeff Astrof (“Trial & Error”) explained that the intricate plot details came about after a conversation with another member of the EP team – Aaron Kaplan (“The Neighborhood,” “A Million Little Things”).

“He came to me and said that a friend of his had sort of pulled this prank on him where he sort of convinced him that the house that he used to live in had terrible atrocities that had taking place there, like a murder or, you know, murder-suicide or something,” Horgan told TheWrap. “I was like, well, I like the idea of setting a comedy in a house where something terrible has happened and maybe the people [that] have moved in there – maybe it starts affecting them – and then I started thinking that it had to sort of be bigger than that, like the stakes have to be higher. And maybe it’s a woman who doesn’t know whether she’s losing her mind or whether the house is possessed or not. So it kind of came from there.” 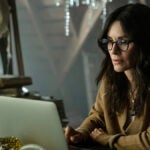 Horgan said from that starting point, she and Astrof “fleshed it out and worked out exactly the tone of it and what we wanted to say with it,” deciding how much of the show would pay homage to different horror dramas.

As the first two episodes revealed, there’s a lot of comedy in the show that come quickly (like when Kinnear’s character asks Pat, “What is this, a Toyota-thon?” during a heated moment), or blink and you miss it (like daughter Gainor documenting her mom moving furniture with her iPhone while her parents are arguing in a sneak peek from Episode 3, which you can see below).

“They really did a nice job of keeping that mix in there,” Kinnear told TheWrap when asked about balancing the comedy with the show’s serious subjects and horror themes. “And, you know, throwing in Toyota-thon is only allowed because of the – there’s a real argument happening there. I mean, these people are really at the edge of the cliff of their marriage. And so when they throw some of these lines in, some of these little moments in … they’re easy to play because they’re never at the cost of what’s really happening in the scene or in the marriage.”

“That’s a really good point,” Cox chimed in during TheWrap’s interview. “It’s true. The seriousness of the subject, they’re dealing with whatever it may be, I think that’s where the comedy comes from.”

“I think it’s so perfect and right up your alley to be like that,” Cox added to Kinnear. “And I think of ‘Little Miss Sunshine.’ And I think, Oh, my God …  you play these real things so well.” 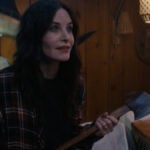 And while Pat and Terry’s arguments show they have serious communication failures, the couple — despite the infidelity and other mistakes in their past — wants it to work.

“It’s such an interesting dynamic and they do really want it to work,” Cox said of the pair. “But it’s going to be hard because, you know, she’s had an affair. He knows about the affair, and that’s kind of what he’s holding on to, but he’s a little oblivious to everything else that she’s going through and he doesn’t want to – he just thinks that, you know, she’s depressed and that’s it. But there’s so much more going on. So it’s going to be hard, but it’s really fun to play with him because he’s so earnest and funny. Greg is hysterical. So is the character. I just love that he’s this guy who’s like waiting to tip and he does every now and then in the series and you’re just, ‘Here he goes.’ But he always acts so earnest and positive and I love that.”