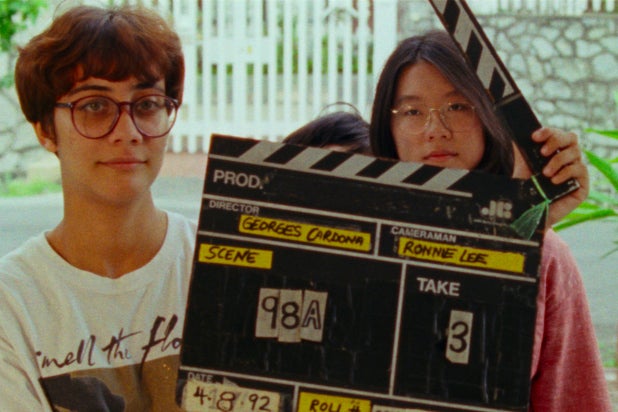 Sandi Tan’s documentary “Shirkers” — about a mysterious feature film also named “Shirkers” that Tan made as a 19-year-old student — unravels like a whodunit.

This is a documentary about the making of a film that disappeared, pilfered away by one of Tan’s now-deceased teachers, Georges Cardona. The only evidence of its existence was in the minds of the makers and those Singaporeans who held out hope that this storied movie, which would have been the country’s first indie feature, would one day find release.

We do, of course, find that the missing footage has been salvaged; a large portion of this film is comprised of scenes from the original footage played under music and Tan’s voiceover. But it’s the story of how the footage is found, and how Tan and her friends see the film and their old teacher now, that is boundlessly interesting.

Tan entices us from the opening frames with vibrant images of a pre-boom Singapore, where she was born and raised, and where she and her friend Jasmine Ng began a fervent collaboration of art, music and film with all the unearned confidence of punk-rock kids.

Suddenly, it becomes apparent that this is actually the original “Shirkers” that we’re watching. Though Tan herself only appears briefly in the film in the present day, she’s in nearly every frame of this mesmerizing footage, playing the role of capricious murderer S.

Ng jokes of Tan writing herself into the lead role. “Oh, I wonder what S stood for,” she says, hinting at their barbed relationship. Scenes of the original “Shirkers” play out like a fever dream with nonsensical action, like a woman dressed as a nurse dancing with a dog on a rooftop, popping up out of nowhere. It’s like “Ghost World” meets “Hausu,” with a lot of walking, thinking and talking (that we can’t hear) as well as popping colors and inventive special effects, the kind of narrative dreamed up by kids unshackled from the need to make sense.

Much of the rest of the film is a combination of present-day interviews with the people who helped make the original film, which is almost always followed by Tan’s own commentary on those interviews, as she wades through her own deeply submerged memories. Most of these stories tend to return to their enigmatic teacher Georges.

At first, I found it frustrating and then fascinating that Tan felt compelled to devote so much of her personal film to the male teacher who both assisted and sabotaged her creative life. Georges, for sure, is a puzzle. In voice recordings, his accent is unplaceable. Pictures capture a vague ethnicity. He’s a kind of Machiavellian figure who seemingly emerges from nowhere to egg on these kids’ creative urges.

Tan collects bits and pieces of what Georges had told others when they were kids and finds that each person contains a bit of knowledge that is a slightly warped version of what the others have; Georges’ insecurities ran so deeply that his life was an avalanche of lies.

One of the stranger sections of Tan’s relationship with Georges comes when he invites her on a road trip across the U.S. Tan is still a teenager at the time, and Georges, well, who knows how old he was. Tan took him up on the invitation and spent her time soaking up his tall tales, the most salient being that the James Spader character in Steven Soderbergh’s “Sex, Lies, and Videotape” was based on him. (Later, we will come to understand that that is a lie.)

Tan accepts these stories as fact, impressionable as she is and searching out validation. It comes as no surprise that on this trip Georges apparently asked Tan to “touch his belly,” and she refused and pretended it didn’t happen. Who wouldn’t see the possibility of Georges trying to take advantage of this young girl? But what makes this story different is Tan and her reaction, which is simply… curiosity. Yet this is also Tan’s interpretation of the memory now, and the longer the film goes on, the more we understand that perhaps all of Tan’s memories are flawed.

What we — and Tan — come to find is that how the director describes or sees herself in the past doesn’t always match up to her collaborators’ opinions of the time; this is also a story about the stories we tell ourselves. Though Tan’s voiceover explaining the origin of “Shirkers” seems direct at first, underneath this measured statement lies a coyness, a sense that perhaps the audience will never receive the full story because of Tan’s own inability to face her past.

At one point, Ng becomes frustrated because she can’t get Tan to see the story outside of herself. She tells Tan: “You’re an a–hole.” And then the film adds yet another layer, its tendrils stretching into an exploration of self-projection. “Am I an a–hole?” Tan wonders aloud.

The significance of that question and statement didn’t hit me at first. The entire idea of a director trying to discover if she is or was an a–hole didn’t completely interest me until the cumulative subtext and unanswered questions of her film hit me. Was she an a–hole like Georges was an a–hole? Was she just as guilty of rewriting her own narrative as Georges was?

Like another breakout independent film this year, “The Tale,” Tan’s documentary attempts to portray her own narrative with objectivity and distance, but she discovers along the way that such a thing may not be possible, that memories will wait years or decades to snag you in their truths.