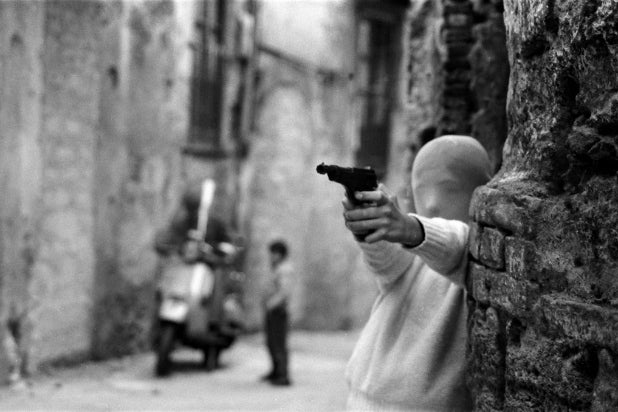 An elusive subject and a general lack of follow-up questions may frustrate viewers of “Shooting the Mafia,” a new documentary about Sicilian photographer Letizia Battaglia and her formative work in the 1970s on the Italian mob.

In the movie, directed by Kim Longinotto (“Shinjuku Boys”), Battaglia appears to be a colorful, but reluctant raconteur; she lets her photographs of the Sicilian mob speak for themselves, leaving a lot of room for basic questions like, “Who am I looking at in this photo, when was it taken, and what was going on when this was shot?”

Longinotto provides some context with archival clips of surrounding events; she also illustrates some of Battaglia’s more personal anecdotes with stock footage and black-and-white Italian movies that show life in small town Italy through fictional melodramas. Longinotto’s doc is, as a result, a frustratingly impersonal, though sometimes moving, portrait of an incredible artist that might leave moviegoers wondering what they just saw.

Through impressionistic present-day interview segments, Battaglia — now in her 80s and with a cigarette in hand — recalls her past in a mostly general way. She does, however, share a few painful childhood memories with candor and humor: she wasn’t allowed outside for a while after a stranger masturbated in front of her. “[My parents] stopped me from living, from growing. I was stunted,” she said, and was forced to go to an all-girls Catholic school. “They made me an atheist straight away.”

Some of these stories are not, however, illustrated or elaborated on in a meaningful way, like when Longinotto shows us an unrelated (and unidentified) bride and groom running down a hallway together, like giddy children, right after Battaglia talks about getting married to “the first boy who asked me” at the age of 16. This wouldn’t be such a tacky juxtaposition if Battaglia hadn’t just told us that she also lost her virginity to an older man (eight years her senior), whose family did not approve of her until they saw her blood on his bedsheets. His aunt supposedly said, about Battaglia: “You’ll do.”

Longinotto also fills in the gaps between Battaglia’s photos and testimony with some TV news clips, seemingly because of Battaglia’s reluctance to talk about some of her work. “I look through my photos and see the name ‘Letizia’ on them. I don’t remember taking them,” she says on one occasion. That news footage serves an essential role since Battaglia sometimes makes claims that are interesting, but not really followed though on, like when she notes that she was the first female photographer to work for an Italian newspaper, or when she says, about Sicilian mob boss Luciano Leggio, “If he could, he would have killed me.”

Also Read: 'The Whistlers' Director on How a Documentary and a Lot of Classic Noir Films Inspired His New Comedy

Unfortunately, some of Longinotto’s stock material is pretty out-of-date, like a scene from what looks like a proto-“Mondo Cane” shockumentary, where a laughably stern voiceover narrator explains that “There is nothing with any money in it that the Mafia won’t touch.” Other footage is compelling on a sensational level, but otherwise vague, like an interview with Leggio, where he complains that he’s more of a victim than the people he killed: “If only the people realized that the killers suffer, not the victims, they might stop doing harm.”

Longinotto also includes a number of supplementary interviews with Battaglia’s peers (three of whom are identified as her “ex-lovers”) that only explain so much about Battaglia and what motivated her beyond her self-described appeal for social justice. (“I wanted to build a better society.”) “Her beauty provoked you” explains L’Ora reporter Eduardo, shortly after fellow photographer Santi mysteriously observes that “Letizia was beautiful. She attracted men like flypaper.”

Battaglia’s present-day reunion with Santi also feels intrusive in ways that might be true to Battaglia’s character, but also inexplicable for anybody who’s first meeting her through Longinotto’s movie. Watching it feels like being dropped in the middle of a heavy, complex drama without an appropriately nuanced explanation of what you’re looking at or why you should want to invest in these characters.

At one point, Battaglia asks Santi: “After 50 years, what are we to each other?” His response is somehow even more awkward: “I often want to be with you, to share a bed with you, to embrace you.” Seconds later, Battaglia observes that “Love is a lie. Love is a swindle. If it was true love, it would never end.” These interactions and observations might be significant, but, presented as they are, their meaning is also unclear.

“Shooting the Mafia” is most persuasive when Longinotto is focused on raising awareness of Battaglia’s moving, provocative photographs. Black-and-white images of mafia victims — their bodies covered in blood and their neighbors and loved ones crying over them — are devastating. I may not know who or what I’m looking at, or how representative Longinotto’s work is of the systemic problems that they probably illustrate. But Battaglia’s photographs radiate an overwhelming mix of emotions, as does any interview sequence that features her.

“Shooting the Mafia” is, if nothing else, a decent introduction to Battaglia’s work, even if the rest of Loginotto’s primer doesn’t tell us much about who Battaglia is, or how to appreciate what she does.