Irish director Juanita Wilson’s Live-Action Short nominee “The Door” is a chilling, beautiful film that begins with a voiceover: “That day we didn’t just lose a town,” says a male voice, in Russian. “We lost our whole world.”

The setting is a town outside Chernobyl, though we don’t know that until later in the film. “The Door” is the heartbreaking story of how the 1986 nuclear disaster impacted the lives of those nearby, but politics are never mentioned; this is a very personal, emotional and terribly sad story, told with economy and grace.

The film is Wilson’s first as a director, though she’s now in post-production on a feature set in Bosnia during the war. The day after Monday’s nominees luncheon, Wilson spoke to theWrap at her hotel, where she’d rendezvoused with the Irish filmmakers responsible for the nominated feature “The Secret of Kells” and the animated short “Granny O’Grimm’s Sleeping Beauty.” 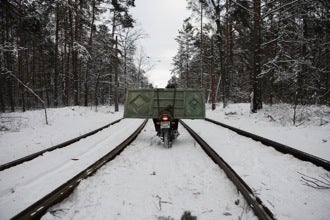 You’re an Irish filmmaker, with a Spanish name, making a movie in Russian. It’s confusing.
I know. Even when we were making it, nobody was sure if it was an Irish film or not. We weren’t even sure the Irish Film Board would be able to support a film that was made outside of Ireland, but they did.

What drew you to the story?
There’s a book by a Ukranian journalist, Svetlana Alexievich, called “Voices of Chernobyl,” which is incredibly moving. She spoke to a lot of people who’d been involved in Chernobyl, and compiled this book of them speaking in their own words.

This particular story is very short, about a page and a half, but the man talks about stealing his own front door, and driving it on the back of a motorbike through a forest. And that image just stayed in my head. It seemed to be a really interesting way to structure something, where you would start not knowing what was going on or if this guy was crazy, and you’d only reveal the purpose at the end of it.

You shot part of the film fairly near Chernobyl, didn’t you?
Yeah. We went to Minsk first to cast the actors, and we were going to shoot it there. But when we got back to Ireland I found a photo of Pripyat, the city where we shot the opening. And the empty ferris wheel, the abandoned playground, seemed such a strong symbol of what the film was about, the loss of childhood, that we thought, we have to go there.  And then I saw a photo of it in the snow, and I thought, okay, we have to go there in the winter. So we put our plans back for six months, and waited for the snow.

How’s your Russian?
Unfortunately, abysmal. I’d love to have been able to communicate better. I had to have an interpreter all the time, which was a big problem when the interpreter would go home for the day and I’d want to talk to the actors over dinner. But they were extraordinary, especially Igor [Sigov], who carries the film. 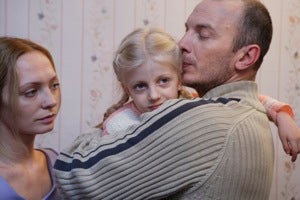 What were you looking for when you cast him?
It’s hard to explain. I wanted somebody with depth. In one of the first pictures I saw of Igor, he was smiling, and there was such incredible life and joy in his face. And I thought, you want somebody you believe would be loving and fun and a wonderful father, even though he never gets to smile in the film.

But he and Juliette [Gering] were just amazing. We did some improvisations, not the actual scenes in the film but parts of their story that had happened before and after, and they came up with this whole life story which was so credible it was extraordinary.

When you were making the film, were things like the Oscars even on your radar?
No. All I was concerned about was that I wouldn’t fall flat on my face. I’d been in the industry for a good few years in different areas, mostly as a producer, so if I failed it was going to be a very public humiliation.

And then I learned we made the shortlist in December, and I spent two months trying not to hope. (laughs) It was exhausting. By the time of the nominations, I had tried to prepare myself so much that I think I was crying from potential disappointment. Trying to log onto the site, I couldn’t breathe. It was the longest minute of my life.

And even though you can say it’s only one ceremony, the interest it attracts is quite extraordinary. I find it incredible that I could go and make a short film on the other side of the world, and then it ends up playing in cinemas here and being on this world stage.

Did you have fun at the nominees luncheon?
Oh, it was amazing just to be included. It felt like fraud, to be there having made only one short film. But they make you feel special.

Who’d you sit with?
Ah, well. I sat beside George [Clooney], actually. Which I’m sure will be to the delight of people back home. (laughs) Yeah, it was nice.