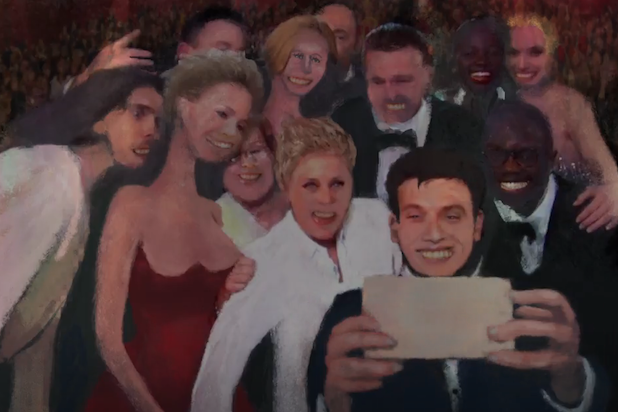 Swiss animator Claudius Gentinetta was drawn to how selfies and oversharing seem to have pervaded every aspect of modern human life.

For his four-minute satirical short “Selfies,” a finalist in TheWrap’s 2019 ShortList Film Festival, he digitally animated hundreds of actual selfies taken by people around the world — from anonymous individuals to Pope Francis and Angela Merkel to a shot of Ellen DeGeneres’ selfie at the 2014 Oscars.

“I was amazed to find such a wide range of selfies in the internet. People take photos of themselves anywhere, and always starting from birth up to Granny’s funeral,” Gentinetta told TheWrap. “It was important for me to show both the public sphere (celebrities) and the most private room, the toilet, next to each other and to show that there is no risky situation too dangerous not to be used for a self-portrait.”

Also Read: ShortList 2019: Why 'One Leg In, One Leg Out' Director Chose Not to Show Sex Worker's Past (Video)

In a segment that unfolds in less than 20 seconds, the film transitions from beachgoers taking selfies while rafts filled with African refugees wash upon the shore to the refugees themselves taking part in the selfies. Then, through split-second photos, the images shift from refugee rafts to holding areas to Syrian war zones.

For Gentinetta, the point wasn’t just to show how selfies can cause us to tune out the unrest around us, but to show how in a bizarre way, the practice of “doing it for the ‘Gram” has become something that has captivated rich and poor alike.

“Selfies are indeed an intercultural phenomenon,” Gentinetta observed. “They’re even a sort of cultural link between refugees and the people of their new host country.”

Gentinetta himself isn’t a selfie fan. The 50-year-old Zurich-based animator says he doesn’t have a smartphone. But don’t think “Selfies” is his way of finger-wagging a younger generation. In fact, he says that he’s been gratified with the discussion “Selfies” has elicited from millennials at film festivals around the world.

“I was thrilled to see that the young audience seems to get the point of the film. At a recent festival in Zagreb, a teacher came up to me and told me the story of a funeral she had to attend for a deceased young student of hers. She was compelled by the flood of displayed selfies of the student himself — all showing the same grin.”

He added, “That’s just what I wanted to show with the film: the Cheshire Cat’s grin that will survive all of us.”