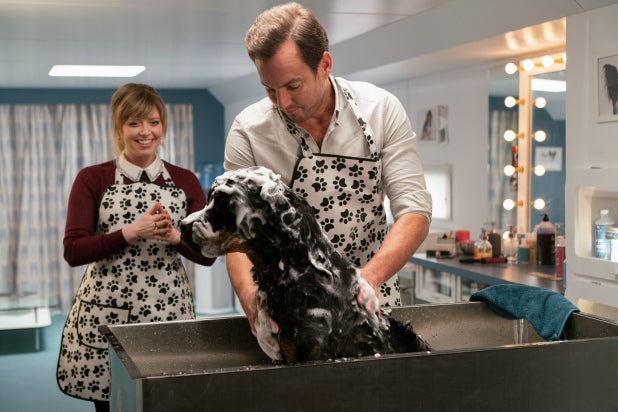 Families with canines are better off staying home and having an old-fashioned backyard frolic than trotting out to see “Show Dogs,” a panting, poorly trained entry in the live-action/talking animal genre that for once makes viewers long for the candy-colored, half-witted professionalism of third-tier Pixar-knockoff animation.

Had it all been digitally rendered and pushed to the edges of anthropomorphized wackiness, you could see where a Las Vegas dog show hiding nefarious doings and infiltrated by a mismatched pair of crimefighters (one four-legged, one bipedal) might make for a suitably diverting afternoon for parents and kids alike.

But however vigorous was the effort on the part of hard-working trainers to get the movie’s various breeds — Rottweilers, pugs, Papillons and more — to hit their marks, the movie around them, as directed by Raja Gosnell (“The Smurfs,” “Scooby-Doo”) feels no compulsion to be as dutiful in its call to entertain. String a few dozen of the cutest YouTube videos posted by pet owners, and an exhibitor would have a better reason to charge an admission fee than they would asking anyone to pay to see “Show Dogs.”

Also Read: Westminster Winner's Traditional Visit With Trump May Have Gone to the Dogs

The movie’s front-and-center canine is Max, a gung-ho Rottweiler in the NYPD’s K9 unit. Voiced by Chris “Ludacris” Bridges, Max is a streetwise, macho, rap-loving lawdog, although the actor’s brusquely funny way with “Fast and the Furious” dialogue is rarely in evidence having to recite the hopelessly corny lines (“bite out of crime,” yadda yadda) provided him in Max Botkin’s and Mark Hyman’s screenplay.

Max is staking out an animal-smuggling ring at the Brooklyn docks when his play is botched by the interference of a similarly determined FBI agent named Frank (Will Arnett). But naturally, the two are soon paired — against their wishes, of course — when the trail leads to a prestigious dog competition in Las Vegas, where it’s believed a kidnapped baby panda is going to be sold behind the scenes. To get close to the ritzy invitational’s inner workings, however, and to ferret out the gang’s ringleader, Frank must pose as a contestant, with purebred Max as his competing companion.

Managing a few no-frills smiles on the sidelines are an aphorism-spouting Zen Komondor (Shaquille O’Neal), and RuPaul fiercely voicing an elaborately groomed — too obvious? — creature named Persephone. But the less said about a trio of witless pigeons who follow Max around, the better.

Despite having gotten his own paws wet with this kind of kid-centered material before, director Gosnell shows little flair for digging into the peculiar appeal of eccentric dog competitions — “Best in Show,” you’re safe — or for showcasing the movie’s star creatures in any way other than as manipulatable figures in a tired rundown of bodily function jokes and scenes of action peril.

That its canine cast’s one-liners are groanworthy is a given, but what’s odd is that there’s little about “Show Dogs” you could even call cute, which, frankly, seems odd for a movie so sure of its dog-powered pizzazz that it has a chihuahua make the winking crack that nobody makes talking-animal movies anymore. (Maybe because the voice actors in these things give the kind of performances that suggest a phoned-in session sandwiched between business calls?)

Mostly, you just feel sorry for the featured canines, and occasionally, the special effects team whose CGI enhancements — as when Max reacts to his first bikini wax, or involving a stunt that would raise the hackles of the SPCA — resemble the kind of clerical errors uninspired office drudges make. Arnett gamely works his patented gruff fumbler shtick, but the real saving grace is fellow human Natasha Lyonne as Daisy’s owner Mattie, the kind-hearted dog lover and former champion who shows Arnett’s Frank the ropes and smiles like she’s actually happy to be in a nutty animal movie.

Had “Show Dogs” somehow figured out how to generate what seems to come so easily to Lyonne –warmth, sunniness, caring, good humor — then maybe it could have been a tasty treat instead of a slobbery, chewed-up toy.