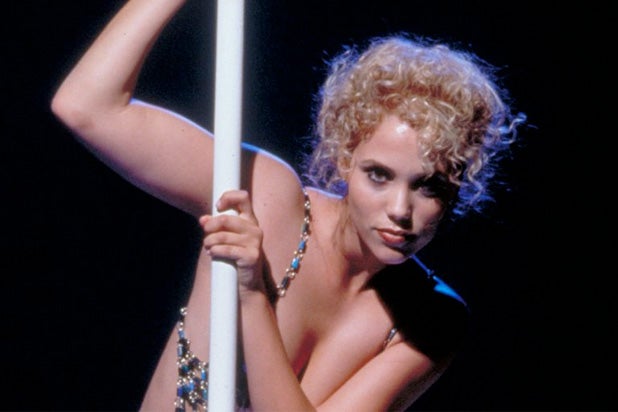 What began as a personal quest to better understand my own fascination with this complicated film evolved into my first feature documentary, “You Don’t Nomi.” Here are a few interesting facts I learned along the way.

1. “Showgirls,” a movie about a volatile and combative stripper-turned-dancer on the Las Vegas strip, was originally pitched as a big, splashy MGM-style Hollywood musical

After a debaucherous research trip to Vegas with Eszterhas, Verhoeven realized he was less interested in a high-brow musical, and more allured by what he saw as the “raucous and sleazy” side of Vegas. Unimpressed with the backstage professionalism of real showgirls, the filmmakers found their inspiration in the “raw sexuality” of Sin City’s notorious strip clubs. Somewhere in between the two, Elizabeth Berkley’s heroine Nomi Malone was born.

2. Nomi almost lashed out at another woman — literally

Early versions of Joe Eszterhas’s screenplay have long been circulating around the internet. In one, we read one of the more outrageous scenes left on the cutting-room floor. Nomi Malone is locked in a prison cell full of other dancers who “all look like hookers.” One of the other women, whom the script describes as a “tough looking black hooker,” makes some sort of sexual advance on Nomi, who responds by violently lashing out. During the attack, the script describes Nomi as “digging her nails into (the other woman’s) face, slashing it.”

It’s hard to see why, but this scene made it far enough along into production that several shots from it could be seen in a few of the film’s early trailers.

3. Fearing a NC-17 rating would be a death knell for box office success, screenwriter Joe Eszterhas publicly encouraged minors to get fake IDs

In an interview that sparked much backlash prior to the theatrical release of “Showgirls,” Eszterhas offered some advice for teenagers who weren’t old enough to buy a ticket given the film’s restrictive NC-17 rating — it was the first time a film with that rating got a wide release in mainstream theaters. “Don’t let anyone stop you from seeing this movie; do whatever you’ve got to do to see it,” he told them. Including, getting some sort of age-falsifying identification.

While he subsequently walked back that comment, in a segment on NBC’s “Today,” the screenwriter defended the morality of the film in a discussion with the head of the MPAA. “The message is about a young woman who refuses to sell her soul, who refuses to sell out against the forces of corruption,” Eszterhas said. “It’s a spiritual message. And forgive me, but I think it’s almost a deeply religious message on a very personal level.”

4. Paul Verhoeven was the first director to accept his Razzie Award in person

The Golden Raspberry Awards, or “Razzies,” were founded in 1981 to celebrate the worst in cinema and held annually the night before the Oscars in a small conference room at the Roosevelt Hotel, back when Hollywood was known for being more seedy than glitzy and the Academy Awards were at the Shrine Auditorium near Downtown L.A. While Halle Berry and Sandra Bullock have since gotten in on the joke and accepted their Razzies in person, Paul Verhoeven would be the first director honoree in the award’s history to show up to the ceremony. He even gave a speech at the event on March 23, 1996, in which he noted that “this is much better than reading the reviews.”

5. Even though it bombed hard, MGM soon tried to capitalize on the emerging cult fan base one year later

By the time MGM released a 10th anniversary limited edition DVD box set, replete with a drinking game, playing cards, shot glasses and an activity called “pin the pasties on the showgirl,” the studio’s marketing department had been hard at work for years nurturing the film’s status as a cult phenomenon. Within a year of its release, MGM started hiring drag queens to attend midnight screenings in New York City to encourage audience participation, thus officially kicking off the revival. Most of the “Showgirls” revival has been organically generated, as in San Francisco, where drag artist Peaches Christ began hosting a movie series called “Midnight Mass.” The first film featured was “Faster, Pussycat! Kill! Kill!” and the second movie was “Showgirls.”

6. “Showgirls” completes a Trilogy of Camp, proof that “civilization had done its job”

Like a queer holy trinity, poet Jeffery Conway notes in his book “Showgirls: The Movie in Sestinas,” “Showgirls” rounds out a trilogy that began in 1967 with “Valley of the Dolls,” and continued in 1981 with “Mommie Dearest.” The bonds between these camp classics may have been unintended, but the ways in which they were each plagued by criticism focused on their lead actresses are strikingly similar. Perhaps as evidence of some sort of otherworldly numerological influence, each film was released 14 years apart. If the pattern were to continue, our next camp classic should have come out in 2009. Alas, we’ll have to keep waiting.

Whether you love or hate “Showgirls,” Showgirls stands alone as a uniquely flawed work of art that succeeds largely because of those flaws. Finding beauty in failure, “Showgirls” audiences have established it as an undeniable camp classic.

Jeffrey McHale’s “You Don’t Nomi” opens in select theaters via digital and VOD on June 9.

View In Gallery
BIO Jeffrey McHale
Jeffrey McHale is a documentary filmmaker based in Los Angeles. His feature film debut, "You Don't Nomi," explores the influence of Paul Verhoeven's "Showgirls." McHale has also worked as a TV editor on the technology and science news series "TechKnow" for Al Jazeera English and the World Cup docuseries "Phenoms" for Fox.

Jeffrey McHale is a documentary filmmaker based in Los Angeles. His feature film debut, "You Don't Nomi," explores the influence of Paul Verhoeven's "Showgirls." McHale has also worked as a TV editor on the technology and science news series "TechKnow" for Al Jazeera English and the World Cup docuseries "Phenoms" for Fox.