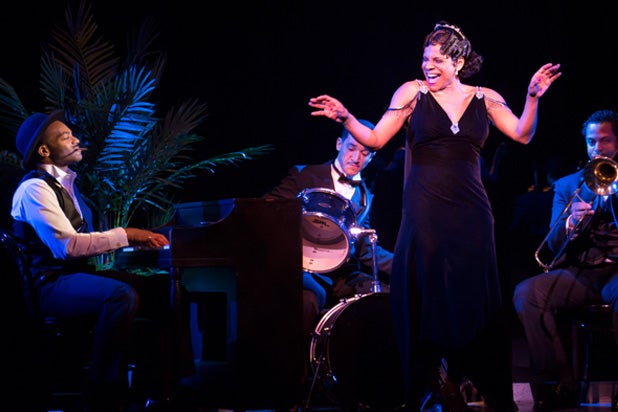 A few years ago, director Bill Condon tried to bring Stephen Sondheim‘s musical “Follies” to the big screen. It was not to be a direct adaptation, but rather what he called a “meta-musical” capturing the behind-the-scenes story of how the show came to be. His script used Sondheim’s songs and James Goldman’s book, but also material from Ted Chapin’s nonfiction account, “Everything Was Possible: The Birth of the Musical ‘Follies.'” Universal Pictures was on board, the money was there, but the widow Goldman said, uh-uh. She had no interest in sharing profit points, among other things, with Chapin.

Who knows? Maybe 95 years from now when the copyrights have run out, Condon’s “Follies” might get made. There is hope. Ninety-five years after an equally iconic but forgotten musical scored on Broadway, George C. Wolfe triumphs with his own meta-musical, “Shuffle Along: or the Making of the Musical Sensation of 1921 and All That Followed,” which opened Thursday at the Music Box.

Wolfe’s show not only recounts what happened behind the scenes at the original “Shuffle Along,” but, as that very long subtitle suggests, what happened to the original actors and the team of four African-American men who wrote the musical. Wolfe uses the original songs by Noble Sissle and Eubie Blake but almost none of the 1921 book by F.E. Miller and Aubrey Lyles.

Wolfe is both director and book writer, and what a story he delivers! He turns every “42nd Street” cliché on its head to celebrate these artists’ tremendous achievement against impossible odds in racist America. Not only did they create and perform in the first black-written Broadway musical, they broke major ground when two black actors sang a love song, “Love Will Find a Way,” before white audiences.

The female star spraining her ankle before opening night is nothing compared to what this troupe endured in 1921 to put their show on the boards.

There’s a lot of history to tell here, and Wolfe doesn’t skimp. He tried something similar with his “Harlem Song,” which opened at the Apollo Theater in 2002 and enjoyed a too-short run. His “Shuffle Along” is a much more successful enterprise, because he has the resources of a Scott Rudin-led production and the “Shuffle Along” backstory gives focus to all that black showbiz history that Wolfe wants us to rediscover.

The easy route would have been for Wolfe to center the story on Eubie Blake (Brandon Victor Dixon, in a low-key but breakout performance). Instead, he shares the narrative with Blake’s lesser known collaborators, with Miller (Brian Stokes Mitchell), Lyles (Billy Porter) and Sissle (Joshua Henry) also speaking directly to the audience.

Four — count ‘em, four — leading men in one musical! It’s a very didactic approach, but whenever their words threaten to turn into a Wikipedia entry, Wolfe the writer hands the reins to his better half: Wolfe the director, with an assist from Savion Glover the choreographer. Both have no equal on Broadway this season.

In a year of pandering, corn-pone musicals, “Shuffle Along” exudes elegance and intelligence at every turn. While it’s big in its ambitions, theatrical thrills, and the emotions it stirs, Wolfe achieves much in very small ways. For example, the original “Shuffle Along” star Lottie Gee (Audra McDonald) refuses to sing Blake’s brand-new tune “I’m Just Wild About Harry.”

“A waltz in a colored show?” she asks. “I’m not singing a waltz in my Broadway debut!” This is Broadway, not Vienna! Then a tap dancer from the chorus shows her how to jazz it up with syncopation, giving a delightful lesson in music history. Better yet, who knew that six-time Tony winner McDonald, in addition to everything else, is a great physical comedienne?

In the awesome “Pennsylvania Graveyard Shuffle,” a tap-dancing chorus conveys both the exhilaration and the exhaustion of doing a series of one-night stands out of town. Wolfe tantalizes us with a short rendition, then cuts away to a bit of exposition. Then he unexpectedly returns to the dance to even greater effect, using nothing but the tappers and their suitcases to stop the show. What “The Music and the Mirror” in “A Chorus Line” is to the solo turn, “Pennsylvania Graveyard Shuffle” is to the ensemble.

Wolfe achieves something similar with “Love Will Find a Way.” He introduces the song to comic effect when two performers fear they’ll be stoned by a white audience, then reprises it as McDonald’s dramatic tour de force.

“Shuffle Along” abounds with such moments of inspired simplicity, and that sophistication is reinforced by the work of veteran designers Santo Loquasto, Ann Roth, and Jules Fisher and Peggy Eisenhauer.