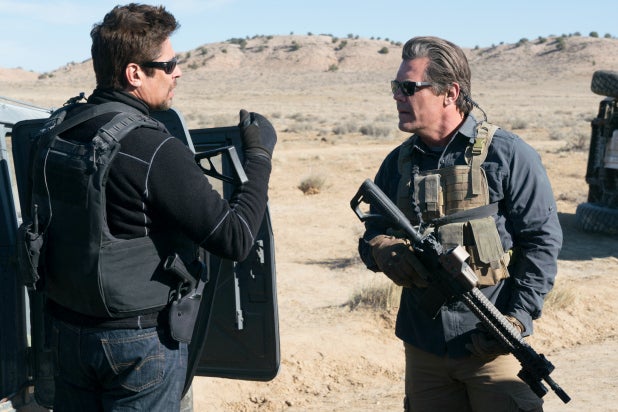 Denis Villeneuve’s “Sicario” is a somewhat remarkable thriller, one where all of the movie’s biggest thrills are just disturbing symptoms of a morally compromised government. It’s surprising that a film so dour and portentous would lead to a sequel, but it’s a little less surprising once you realize that “Sicario: Day of the Soldado” sidelines most of that pointed commentary in favor of blunt force, action-packed trauma.

“Sicario: Day of the Soldado” begins with a group of people illegally crossing the Mexico-U.S. border, but when American agents hold one of the immigrants at gunpoint, he blows himself up using an explosive vest (which he apparently wore throughout the whole journey, just in case). The camera then slowly pans over several prayer blankets as threatening music emanates in the background, an overblown moment which would be absurd if it wasn’t followed by Middle Eastern terrorists blowing up a big-box store while a blonde woman begs for the life of her child.

At this point, “Day of the Soldado” no longer seems absurd, and from here on out it comes across as uncomfortably misguided and backward.

The plot of the film involves the American government enlisting the ethically bankrupt Matt Graver (Josh Brolin) to start a war between the cartels in Mexico, giving the American military an excuse to get involved, ostensibly to protect our borders from terrorists.

Graver once again returns to vengeful ex-lawyer Alejandro Gillick (Benicio Del Toro) to help him assassinate cartel leaders and to kidnap Isabela Reyes (Isabela Moner, “Transformers: The Last Knight”) to turn the criminal organizations against one another. But when the job turns bad, Alejandro refuses to kill Isabela to cover their tracks, and it’s up to Matt to stop him from crossing the border back into the United States.

A political thriller about illegal immigration and the kidnapping of a Mexican child by American agents sounds more topical than it actually is. Like its predecessor, “Sicario: Day of the Soldado” spends a lot of its running time talking about politics, but unlike its predecessor, it seems trapped in an earlier era, in which the American government felt like it needed an excuse for an extreme crackdown on illegal immigration, and in which advisors yell things like “POTUS isn’t worried about winning, he’s worried about being f**king impeached!”

It’s tempting to take “Sicario: Day of the Soldado” at face value, as just a gritty and violent thriller, but even through that lens it’s uniquely dissatisfying. Some movies have antiheroes, but in “Day of the Soldado” there seem to be only villains. Graver is willing to destroy lives in an ongoing effort to, for reasons his superiors barely need to explain to him, destroy even more lives. Gillick is on a mission of vengeance, but along the way he’s become a pawn in a game with more horrifying stakes.

Even Gillick’s stab at redemption comes across as self-serving, a chance to connect to a surrogate version of a family member he’s lost. Gillick doesn’t form a connection with Isabela over the course of “Sicario: Day of the Soldado”; he uses her as a prop. And as ugly as that is, it’s in keeping with one of the most disturbing elements from the original film, the tendency for these brutal men to use women and, in the process, completely destroy them.

But whereas “Sicario” had the decency to at least find that horrifying, even though the perpetrators got away with it, “Day of the Soldado” takes no time to ponder the consequences. All the human strife, all the political squabbling, comes across like an excuse to be “badass” but high-minded about it. The film’s shootouts are “cool” but lack anything resembling a meaningful perspective, so when the characters talk about the political rationales for their violence, it rings hollow. And when the bullets fly, nothing else seems like it ever mattered.

Also Read: 'Soldado' Screenwriter on Why Emily Blunt Won't be in 'Sicario' Sequel

“Day of the Soldado” strips away the meaning and the hypnotic visual style from the original, and reveals that there’s not much more underneath. It’s a macho thriller with ham-fisted sequel teases and a heavy dose of misguided pretension. That some of the film’s set pieces are incredibly suspenseful is not a compliment. They only serve to disguise just how misguided this follow-up is. “Day of the Soldado” reduces real suffering to the backdrop in order to foreground how slick and alluring those who afflict all that pain can look.

It’s hard to take a story like that “the right way” unless something about it actually feels “right,” and nothing does. It’s a tough-as-nails action thriller, and all those nails are hammered directly into the movie’s own coffin.