Sidney Powell, the lawyer who supported former president Donald Trump’s baseless claims that the 2020 election was somehow stolen, was grilled by an Australian journalist over her beliefs.

In an interview clip that aired Monday, the Australian Broadcast Company’s Sarah Ferguson asked her, “Do you ever hear yourself and think it sounds ridiculous?”

“No,” Powell replied. “I know myself very well. I’ve been in me a long time. I know my reputation. I know my level of integrity.” 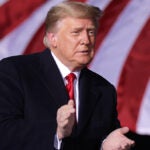 Ferguson’s question came after Powell described a “bloodless coup” she said was carried out by local and national election officials to hand the Nov. 2020 election to President Joe Biden. In March, when moving to dismiss the massive defamation suit brought against her by Dominion Voting Systems, Powell argued that “no reasonable person would conclude” that her false statements about Dominion — which included allegations that the company was engaging in widespread voter fraud — “were truly statements of fact.” Ferguson also rolled a clip of Fox News host Tucker Carlson saying Powell “never demonstrated that a single actual vote was moved illegitimately by software from one candidate to another — not one.”

Powell, who is also being sued by voting systems company Smartmatic, asked Ferguson at one point if the journalist herself worked for Smartmatic. Ferguson was questioning her at the time about how much research she did into the voting systems before claiming they rigged the election.

When questioned, Powell could not confirm basic facts about the complaint she filed and eventually walked off set.