This review was first published on Sept. 16, after it screened at TIFF 2021.

In “Silent Night,” first-time writer-director Camille Griffin wickedly weaves together holiday-movie and end-of-the-world–movie tropes, but once the shock of that juxtaposition wears off, we’re left with a slightly underboiled pudding, despite a sharp ensemble’s most valiant efforts.

Part “When the Wind Blows” (the grim 1986 animated feature about Brits keeping calm and carrying on in the face of nuclear disaster) and part “Peter’s Friends” (Kenneth Branagh’s 1992 comedy about school chums gathering in a big house for the holidays to drink too much and open old wounds), “Silent Night” assembles a group of family and friends to celebrate Christmas — only at midnight, Santa isn’t coming. Instead, the Four Horsemen of the Apocalypse are scheduled.

Nell (Keira Knightley) and Simon (Matthew Goode) are hosting Christmas in their charming country home, and as usual they’ve invited their closest friends: upper-class twits Tony (Rufus Jones, “Stan and Ollie”) and Sandra (Annabelle Wallis, “Malignant”), abrasive Bella (Lucy Punch, “Into the Woods”) and her soft-spoken girlfriend Alex (Kirby Howell-Baptiste, “Cruella”), and physician James (Sope Dirisu, “Gangs of London”) and his American partner Sophie (Lily-Rose Depp). Everything seems quite normal, until Sandra mentions spending the college fund of her daughter Kitty (Davida McKenzie) on a new pair of shoes, and Nell sends Simon and Tony to go break into a local shop to steal some dessert. 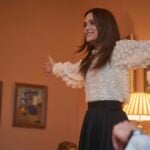 This Christmas, apparently, will be everyone’s last — climate change–spawned tornados of poisonous gas will be wiping out humanity, and after midnight, they’ve all decided to take their government-distributed poison capsules and kill themselves. (Or as the calm and collected official website one character visits puts it, “Take your exit pill, and die with dignity.”) The holiday tableau is spoiled by Nell and Simon’s oldest son Art (Roman Griffin Davis, “Jojo Rabbit”), who’s having second thoughts about taking his pill, even though the adults all reassure him that the science is sound and that dying of the airborne toxins will be far more painful and gruesome.

Impending-disaster dinner-party comedies have become something of a staple among low-budget filmmakers in recent years, although the granddaddy of the genre remains Don McKellar’s “Last Night,” which offers a few Toronto exteriors but still takes place mostly inside houses and apartments. Griffin and cinematographer Sam Renton make the most of production designer Franckie Diago’s cozy location — twinkle lights abound as the world outside their windows is falling apart. 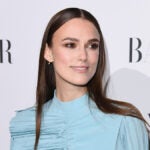 The screenplay, however, doesn’t go nearly deep enough to turn these character types into characters; there’s little impression of how this group is acting differently in the face of impending demise than they would at any other Christmas, and while Griffin finds comedy in mundane details (even at the apocalypse, everyone will cling firmly to their food and beverage preferences), the people here are all underwritten, even as these talented performers provide as much inner life as they can. (The cast also includes Griffin Davis’ younger twin brothers as Art’s siblings Thomas and Hardy.)

There are, at least, delectable moments of prickly interplay: Nell, Sandra, and Bella have a shared history that goes back decades, and the trio of actresses very skillfully summon past jokes and resentments in their scenes together. Unfortunately, a potentially interesting subplot for James and Sophie barely gets off the ground, and Alex is clearly Chekhov’s alcoholic — when her sobriety is mentioned in the first act, it’s just a matter of time before she hits the prosecco.

And to get too deep into the issues of what’s going on outside and how to interpret it is to find even more fault lines in the screenplay. It’s a movie that, accidentally or intentionally, could be interpreted as championing or satirizing those with an anti-science bent, but since “Silent Night” offers contradictory evidence about the severity of the pending environmental disaster, it all comes off without much meaning at all. Ambiguity, in this case, is less intriguing than it is confusing.

Still, Griffin juggles her many characters well, and she’s very smart about weaponizing the coziness of Christmas movies to make uncomfortable points. “Silent Night” may wind up being a successful calling card for her (as a director if not as a screenwriter), but for all the beautiful wrapping, it’s mostly an empty box.

“Silent Night” opens in US theaters and on AMC+ Dec. 3.