Simon Cowell pulled out of the “X Factor Israel” show and will no longer appear as a judge, according to Jewish News, Britan’s largest Jewish newspaper.

The U.K. music magnate hasn’t said explicitly why he was leaving the competition show, but an anonymous source “close to Cowell” told Jewish News, “Simon won’t be going to Israel after all. I know it has already been announced that he was one of the judges, but for a number of reasons he just can’t be there in Israel to film the show now. Of course he is bitterly disappointed but it was a decision he had to take.” 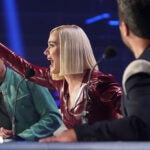 A Reshet spokesperson told Variety May 30 that Cowell canceled “for his own reasons” and said the company “declined to say whether Cowell would have any part in the production” if he wasn’t a judge. They added that Cowell’s staff members had previously “reached out with legitimate concerns over his participation in the show” after recent violence in the Gaza strip.

Jewish News reported that there wasn’t a clear link between the recent escalations in the conflict between Hamas and Israel. The publication also said that their source noted Cowell had concerns about his health and the “impact of a busy work schedule” — the former “American Idol” judge fractured his back in an electric bike accident last August and had surgery to correct his injuries in December.