The episode aired live coast to coast, with voting open for the entire run of the show as the audience chose between finalists Chayce Beckham, Grace Kinstler and Willie Spence.

At the end of the night, Beckham was crowned the winner, capping off a season as a clear front runner with performances like “You Should Probably Leave” and his original song “Mamma.” 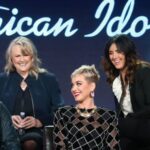 The finale saw the finalists perform three solos apiece, one “Hometown Song,” a “Favorite Moment” revisiting one of their past performances and a judges’ choice.

Beckham performed “Fire Away” by Chris Stapleton, revisited his performance of Ed Sheeran’s “Afterglow” and was given The Beatles’ “Blackbird” by the judges. Kinstler performed “I Have Nothing” by Whitney Houston, revisited Aretha Franklin’s “(You Make Me Feel Like) A Natural Woman” and was given Celine Dion’s “All By Myself” by the judgest. Spence’s three songs were “A Change Is Gonna Come” by Sam Cooke, “Stand Up” by Cynthia Erivo and “Georgia on My Mind.”

“American Idol” has already been renewed for a 20th season at ABC and will return to the network next year.