Thanks to his many years of judging TV competitions, people definitely come to Simon Cowell for, well, judgment. Apparently, that includes requests to judge sexual endeavors — and they’re willing to pay quite a bit.

During an appearance on “Late Night with Seth Meyers” on Thursday, Meyers had to ask if Cowell ever had people coming up to him on the street, asking him to judge things. The “America’s Got Talent” and former “American Idol” judge confirmed that “I get that all the time,” and revealed that once upon a time, he was offered money to judge a very personal moment.

“This is a true story, a couple came up to me in a restaurant and said ‘We’ll pay you X amount of dollars’ to watch them having sex, and will I judge it?” Cowell said. “And I said, ‘Well, how much?’ And stupidly said no.” 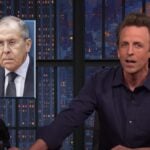 Also Read:
Seth Meyers Mocks Russia’s Threat Over US Sanctions: ‘This Is America, We Attack Ourselves’ (Video)

In an effort to potentially get that opportunity again, Cowell called out the couple on screen. You can watch the exchange in the video above.

“If you’re watching, I’ll do it,” he said seriously.

Naturally, Seth Meyers was curious as to how much money Cowell was actually offered by this couple. And according to the judge, it was a six-figure deal.

“I think, from memory, I mean — I think it was about 150 grand,” he revealed. “I don’t know how they calculated it.” Before the two moved on, Cowell circled back to his re-offer, saying again, “If you’re watching, I’m available.”